In 2014, Prime Minister Lee Hsien Loong announced the plan to rename the Institute of Southeast Asian Studies (ISEAS) to “ISEAS-Yusof Ishak Institute”, as one of the three ways to pay tribute to Encik Yusof Ishak, Singapore’s first President; the other two being the naming of a new mosque in Woodlands and establishing a Yusof Ishak Professorship in Social Sciences at NUS. In his opening remarks at the renaming ceremony, Professor Wang Gungwu, Chairman, ISEAS Board of Trustees, observed that, “We all know that Yusof Ishak believed in multi-culturalism and secularism. Similarly, ISEAS studies the complexity and diversity that is Southeast Asia, as well as the integrative process happening within the ASEAN framework, and the region’s interactions with the rest of the world.” Read Professor Wang Gungwu’s speech. 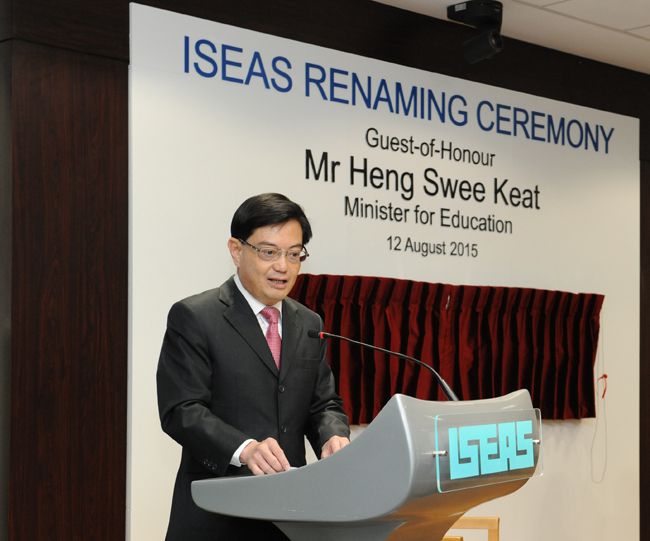 Minister Heng Swee Keat also acknowledged the Institute’s growth in scope and repute over the years, as it developed its own independent identity and priorities as a think tank. He emphasised Encik Yusof’s commitment to the vision of Singapore as a progressive, meritocratic, and multicultural society, and expressed his hope that “as ISEAS continues in its next 50 years as the ISEAS-Yusof Ishak Institute,….its name will constantly call to mind all that vision – of equality, justice, harmony and strength amid diversity.” Read Minister Heng Swee Keat’s speech.
On the occasion, the Institute also launched a monograph and photo exhibition on Encik Yusof Ishak – about the man, his ideals, and his role in Singapore’s nation-building. A photograph exhibition on Encik Yusof Ishak was also opened at the Institute’s Library by Puan Noor Aishah. A book entitled, “ISEAS: Studying Southeast Asia”, which traces the history and evolution of the Institute in the last 50 years, was also launched at the ceremony. Veteran Straits Times journalist, Mr Lee Kim Chew, authored the book.