A+ A-
Co-organised by the ISEAS-Yusof Ishak Institute and the University of Michigan, the “Indonesia Forum 2018: Evolving Political, Economic and Business Environment Going into 2019” took place on Friday, 21 September 2018 at the Orchard Hotel.
INDONESIA STUDIES PROGRAMME

Friday, 21 September 2018 – Co-organised by the ISEAS-Yusof Ishak Institute and the University of Michigan, the “Indonesia Forum 2018: Evolving Political, Economic and Business Environment Going into 2019” took place on Friday, 21 September 2018 at the Orchard Hotel. This interactive, half-day forum brought together experts to discuss topics ranging from the 4th Industrial Revolution to the role of Islam in politics, drawing over 117 attendees.

The event kicked off with Welcome Remarks by Choi Shing Kwok, Director of the ISEAS-Yusof Ishak Institute and Allen Hicken, Professor of Political Science at the University of Michigan. Mr Choi and Prof Hicken highlighted the challenges and opportunities for Indonesia that lie ahead in 2019 and beyond, referencing worldwide trends in populism and economic protectionism. Mr Airlangga Hartarto, Minister of Industry of the Republic of Indonesia, delivered an insightful keynote address centered on his optimism for the Indonesian economy. Ushering in the new era of Industry 4.0 and reviving Indonesia’s manufacturing sector were key priorities for the government up to and beyond next year’s elections. The first panel, moderated by Prof Hicken, featured Yenny Wahid (Director of the Wahid Foundation), Philips J. Vermonte (Executive Director of the Centre for Strategic and International Studies, Indonesia), and Edward Aspinall (Professor of Politics at the Australian National University). The panel focused on Indonesia’s political environment and addressed a wide range of key questions in light of the upcoming campaign season.

Some of the issues highlighted were the prominence of identity politics and the role of religious identity in particular. The panel also outlined the key differences between the 2014 presidential elections and next year’s re-match between the presidential candidates. The panelists argued that the 2019 elections would still reflect the larger symptoms of national politics and the old problem of how to finance Indonesia’s democracy. They also indicated two major changes that seemed to be advantageous to Jokowi. The first was that Jokowi had become the establishment candidate of a country increasingly showing characteristics of a hybrid regime. The second was that the political climate was arguably at the peak of polarisation post-Soeharto. The second panel, examining Indonesia’s economics and business landscape, was moderated by Dr Siwage Dharma Negara (Co-coordinator of the Indonesia Studies Programme at ISEAS) and the panelists were Hariyadi Sukamdani, (Chairman of the Employers’ Association of Indonesia, APINDO), Manggi Taruna Habir (Independent Commissioner with PT Bank Danamon Indonesia Tbk), and Jason Tedjasukmana (Head of Corporate Communication of Google Indonesia). The panel provided insights from the banking and business sectors on the state of Indonesia’s economy and the factors affecting investment and business in the coming year, especially amidst increased external uncertainties. The panel also considered the macroeconomic situation and overall trends in employment opportunities across the country, emphasising the growing potential in sectors such as e-commerce, digitalisation and tourism. 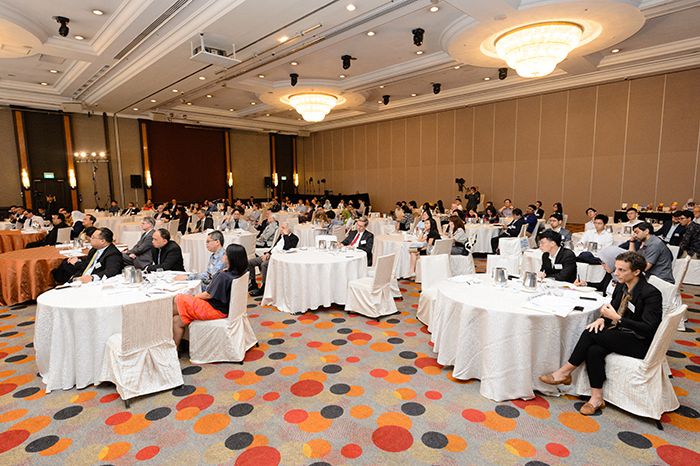 Scholars, government representatives, diplomats, businessmen and media were among those who attended the forum (Credit: ISEAS – Yusof Ishak Institute)

The forum attracted scholars, government representatives, diplomats, businessmen and media. Participants left with new insights from the panels and the Q&A sessions. Topics covered ranged from the impact of the US-China trade war to the anticipated importance of vice-presidential candidates for the 2019 election. Overall, the outlook for Indonesian politics was that the 2019 election would be a contest for the predominantly “swing” voter base, whereby capturing the votes of young voters had become a key goal for political actors. The outlook for the economy appeared promising because of the rising middle class, digitally-connected society and opportunities arising from advanced manufacturing, Industry 4.0, e-commerce and tourism.