The first panel on “The Riau Islands: Finding Its Feet” which was chaired by Dr. Francis Hutchinson reviewed the historical particularities and political developments which led to the creation of the Province of the Riau Islands (KEPRI) as a province and the enactment of a development masterplan.  Prof. Barbara Andaya (Visiting Senior Fellow, ISEAS – Yusof Ishak Institute) in her presentation looked at potential sources of historical tensions and integration relating to KEPRI.  KEPRI was formed following Dutch lines in 1848, and for a time the archipelago was kept in the same administrative grouping as the Sumatran mainland area of Riau province; however this proved problematic as the east coast of Sumatra and KEPRI historically had centuries of conflict with each other.  Prof. Andaya argued that it would have thus been difficult to integrate the two areas, as was attempted during the Dutch colonial period and the pre-1998 Reformasi periods in Indonesia.  She also highlighted how the Orang Laut, a semi-nomadic type of sea people who lived in KEPRI had rivalries and were not monolithic in their allegiances to the various sultanates in the Straits of Melaka and the Riau-Lingga area.  Prof. Andaya analyzed that there would still be difficulties for the outlying islands as for example, those in the Pulau Tujuh regency had greater links with Singapore and West Borneo than to the main Riau-Lingga island area.  Although KEPRI was historically seen as a peripheral region, Prof. Andaya still saw the potential in uniting the main Riau-Lingga KEPRI heartland and the outlying islands.  Finally, Andaya problematized how Malay identity was being used in the province as a unifying factor as the category was one that was very porous. Mr. Faizal Rianto (Public Administration Study Program, Sekolah Tinggi Ilmu Sosial dan Ilmu Politik (Stisipol) Raja Haji Tanjungpinang) and Mr. Mulya Amrita (LKY School of Public Policy, NUS) in their presentation highlighted how KEPRI’s state formation was part of a larger trend in creating sub-national government entities.  Although KEPRI had a higher own source revenue compared to other provinces and thus was seen as having higher degree of financial independence, the presenters highlighted the fact that businesses and investors complained of vertical and horizontal coordination issues, which was made worse by having to deal with the dual government administrative divisions.  Dr. Ida Widianingsih (Head of the Post Graduate Program in Public Administration, Universitas Padjajaran) in her presentation explained that the current master plan for KEPRI was in the process of getting final national level approvals and had experienced lengthy complications due to its unique dual administration system.  However, the provincial government was still using the old masterplan. The second panel on “Economic Challenges” was chaired by Dr. Lee Hwok Aun (Senior Fellow, ISEAS – Yusof Ishak Institute).  Dr. H. Syamsul Bahrum (Assistant for Economic and Development of Riau Islands Provincial Government) in his presentation discussed how shipping was crucial to KEPRI trade and how 70% of KEPRI revenue generation came from Batam.  However, as Batam’s industry was largely export-oriented and due to the global market slowdown, this has led to markedly slower economic growth in the 2016 and 2017.  The KEPRI provincial government has tried to spread government expenditure to the other islands and other sectors to reduce and manage future risks.  Mr. Silmar Salim (Institut Teknologi Bandung) in his presentation on urbanization trends in KEPRI outlined that while Batam was the main focus of past urban development and migration, Bintan and Tanjung Pinang have also experienced rapid growth.  He outlined issues regarding freshwater availability for Batam; energy shortage, sanitation issues, and coastal land reclamation issues for Banjung Pinang; and land legal disputes in Bantan, and argued that Batam was likely to experience limited growth potential in the near future.  Mr. Sayed Fauzan Riyadi (Head of Department, International Relations, Raja Ali Haji Maritime University) in his presentation on agriculture and fishery in KEPRI intimated that these KEPRI industries had close ties with the wholesalers in Singapore and was greatly affected by Singapore’s shift in the past from re-exporting and processing raw agricultural goods (such as copra) to the manufacture of high tech materials and other service industries.  He argued that the agriculture and fishery industries were much more stable contributors to the province’s GDP and less sensitive to global market forces, but that as traditional networks of middlemen connections were still strong, the fishing industry experienced difficulties in modernizing and upscaling processes. The third panel on “Living Together” was chaired by Dr. Ulla Fiona (Fellow, ISEAS – Yusof Ishak Institute).  Dr. Charlotte Setijadi (Visiting Fellow, ISEAS – Yusof Ishak Institute) in her presentation emphasized how the ethnic Chinese in KEPRI saw themselves as an archipelagic people, and part of a larger network of circulation associated with communities in Singapore and the Straits of Melaka.  Dr. Setijadi argued that although the ethnic Chinese population percentage in KEPRI of 14% is second only to West Kalimantan, they experienced less anti-Chinese sentiments there as there was great distance from Jakarta and assimilation policies were not as readily applied.  Furthermore, she mentions that there was an implicit ethnic-based hierarchy in place, where everyone was to know their place in society.  However, she argued that if KEPRI’s state identity was based on “Malayness,” it would likely alienate the Chinese communities and affect their future sense of security in the province.  Dr. Deasy Simandjuntak (Visiting Fellow, ISEAS – Yusof Ishak Institute) in her presentation argued that the Batak ethnic migrant community, which was the third largest in KEPRI, were quite successful in the bidding for elected government positions due to the recent rise in clan community organizations such as Rumpun Batak Bersatu who made concerted efforts to vote members of the community into positions of authority.  She argued that as gaining a high position was seen as aspirational goals for Batak clan members, this created a good pool of potential candidates, whose most prominent members would be put forth for election.  Ms. Sita Rohana (Researcher, Culture and Tradition, Balai Pelestarian Nilai Budaya (BPNB), Kepri) in her presentation on the Javanese community on KEPRI mentioned that the Javanese migrant communities largely came from Central and East Java and the migration to KEPRI could be dated back to Dutch colonial period when they were brought there to serve as servants of the Dutch officers.  Unlike in Singapore and Johore where Javanese-ness was often subsumed and/or hidden under the larger category of Malay, the Javanese politicians did not hide their ethnic and political affiliations, and the social organizations which promoted Javanese activities and events were quite active. 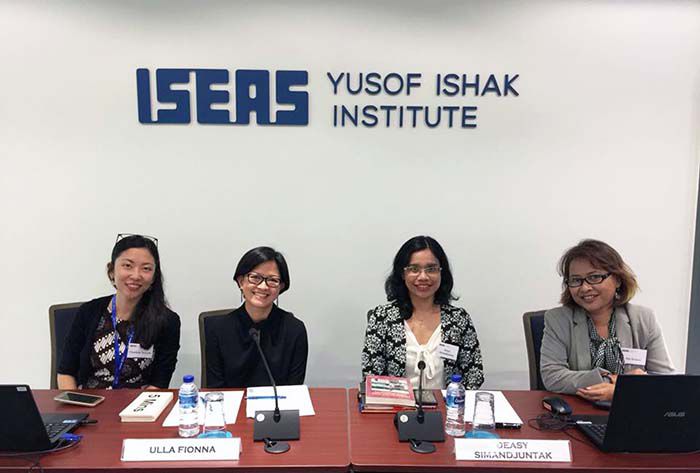 The fourth and final panel on “Looking Forward” was chaired by Dr. Cassey Lee (Senior Fellow, ISEAS – Yusof Ishak Institute). Mr Sayed Fauzan Riyadi (Head of Department, International Relations, Raja Ali Haji Maritime University) highlighted that KEPRI tourism was significant and growing; despite its peripheral nature, the region captured over 14% of all tourism to Indonesia. Mr. Riyadi highlighted that were was multi-level government support for tourism but that the tourist demographic was changing, with visitors wanting to do more island-hopping activities. Next, Dr. Siwage Dharma Negara (Fellow, ISEAS – Yusof Ishak Institute) and Dr. Francis Hutchinson (Senior Fellow, ISEAS – Yusof Ishak Institute) gave a presentation which highlighted on the economic challenges in Batam after the establishment of the FTZ. Dr. Hutchinson earmarked several problems, such as the change in political priorities away from industrialization to traditional pursuits which constituted a smaller percentage of GDP, the higher wages that investors and businesses had to pay workers due to the higher prices in basic commodities, and the difficulties businesses had in getting things done (in terms of regulations, administrative paperwork). This led to many investors shifting production to areas closer to the centre of the Indonesian markets in Java with better logistics where they could do manufacture for both local and export markets. Dr. Hutchinson remarked that although Batam might be converted to SEZs, there were many structural and logistical challenges which make it difficult. 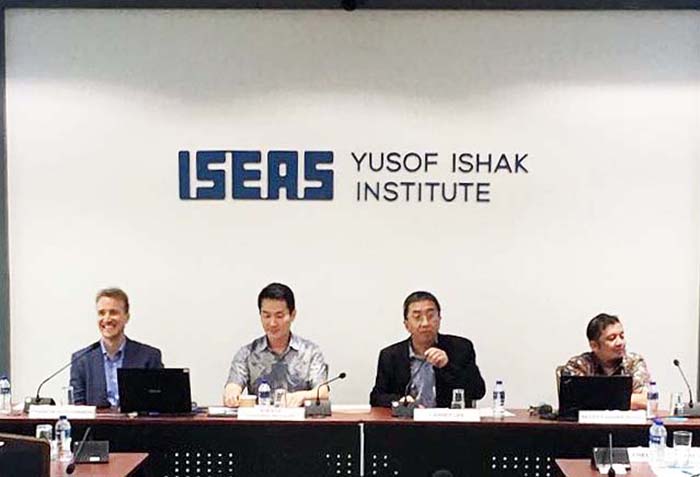 Dr. Negara on the other hand discussed the results of a survey looking into 400 firms in KEPRI and how they compared to 23,000 firms in Indonesia as a whole for certain key industries. He saw that KEPRI still had a comparative advantage for electronic and electronic goods but that it had a very high dependence on imported inputs—this highlighted a structural weakness in the industry. He also mentioned that while the KEPRI shipbuilding and repair industry had declined significantly since 2015, there were more domestic firms engaging in the industry. He argued that in order for Batam to continue growing, being able to ensure competitive wages would be paramount. 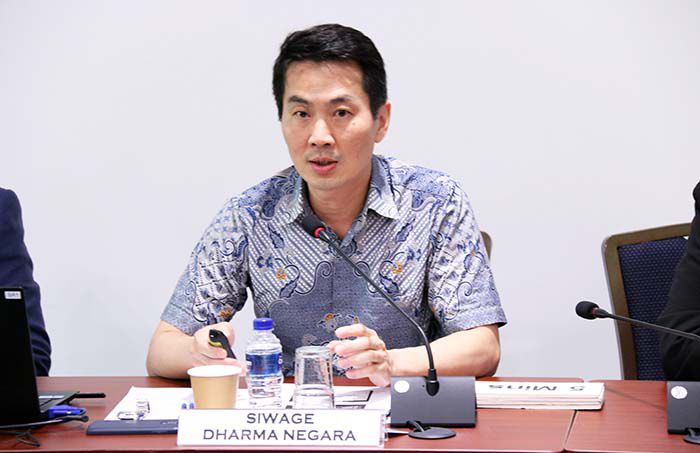 The one-day multidisciplinary conference, which involved 16 moderators and presenters, was attended by an audience of 69 people, including those from the ministries, the diplomatic corps, the business sector, researchers, students, and members of the public.  The discussions were lively and several key discussions involved how centre-periphery politics and logistics affected KEPRI—distance to the centre in Jakarta and the proximity to Singapore became key factors.  Another point of discussion was how the booming tourism industry was able to help compensate for weak economic manufacturing sector numbers. The audience included people from the ministries, the diplomatic corps, the business sector, researchers, students, and members of the public (Source: ISEAS – Yusof Ishak Institute)