PANEL 1 — TRENDS IN THE MALAY ELECTORATE

The first panel, moderated by Dr Francis Hutchinson, started with Dr Serina Abdul Rahman’s presentation on “The Rural Vote” in East Johor, West Johor, and Kedah states. Dr Serina’s presentation was based on her earlier survey work which involved surveying respondents in the rural areas of the aforementioned states over common voter concerns such as fears of the loss of Malay rights, distrust of the DAP, cronyism in government, and various economic concerns including the GST, petrol prices, cost of living, land and housing, and most importantly, jobs.

The second speaker for Panel 1 was Dr Norshahril Saat, who presented on his assessment of PAS’s electoral chances in Kelantan. Parliamentary constituencies like Kubang Kerian, Kota Bharu and Pengkalan Chepa will likely remain under PAS, while others like Jeli will be closely contested. However, the passing of Nik Aziz in 2015 will be a significant factor that will affect PAS’s electoral chances in GE14. Further, BN is expected to campaign with increased confidence, enticing voters with welfare support and government aid, particularly when floods have affected the livelihoods of many constituents. The second panel, moderated by Dr Ulla Fiona, commenced with a presentation by Prof Meredith Weiss, entitled “Counting (on) The Money in GE14”, which touched on the expected impact of economic voting, campaign spending and financial corruption and scandals on voting behaviour during GE14. Prof Weiss elaborated on three key considerations for campaign spending in GE14. The first was on economic voting. Voters will base, in part, their voting decision on a comparison of their economic position between the past and present. Second, campaign spending and communication of the spending will be vital for parties to sway the votes with budgetary promises leading up to the general election. Lastly, issues of corruption and scandals will continue to be a talking point during GE14, although it is unclear if reports on the 1MDB scandal will have enough traction to sustain significant government reforms as some within the government were also the scandal’s largest benefactors.

The second speaker for panel 2 was Dr Cassey Lee, who presented on “Social Media in GE-14”. By analysing pre-election social media data, the presentation provided unique insight on how social media could affect voting behaviour in the coming general election. Dr Lee found that female MPs were more active on Facebook than their male counterparts, and that the size of one’s constituency and margin of victory in previous elections was positively correlated with one’s participation on Facebook. Dr Lee noted that having a large Facebook following did not necessarily translate to a more active following. The subject nature of the contents of a post and how it is communicated were also found to affect the number of shares, comments and likes of the post. Dr Lee concluded that the use of social media platforms like Facebook and Twitter will be important for communicating political messages during GE14, with the exception of states like Sabah and Sarawak. The panel moderated by Dr Malcolm Cook commenced with Dr Lee Hwok Aun’s presentation on “GE14 in Selangor: The Big Prize Fight”. He provided a description of the socio-economic conditions in Selangor, and the election outcomes in recent times. Dr Lee noted that there were notable vulnerabilities in store for Pakatan in GE14. He argued that GE14 would be significantly influenced by electorate sentiments about economic protection. He argued that some of the key trends for GE14 included the following: Three cornered fights between UMNO, Pakatan, and PAS, which splits the Malay vote. Pakatan still holds some advantages of incumbency but will face tough contests, PAS stands to lose the biggest number of seats, and UMNO might gain the most number of seats. Dr Lee also noted that GE14 would be significantly impacted by the magnitude and direction of a Malay “tide” of voters, and whether proposed electoral boundary re-delineation will be gazetted prior to the elections.

As the second speaker, Dr Francis Hutchinson, presented on “BN in Johor: The Loss of the Homeland?” He noted that BN’s track record in Johor parliamentary and state contests have been exceptionally consistent since Malaysia’s independence. However, since 2008, levels of support began to dip and continued to fall further in 2013. Looking forward, he predicted based on survey data and historical trends that BN was in danger of losing urban seats such as Pasir Gudang, Tebrau, and Pulai. That said, it was likely that BN would still retain the state. Planned redelineation measures would likely help BN gain another few seats. The unknown factor, however, is the impact of two new political parties into the electoral race, Bersatu and Amanah. He argued that based on an ISEAS-commissioned survey earlier in 2017, these two parties are yet to make significant inroads with voters. In addition, there appears to be an overlap in support for UMNO and PAS, with the latter most likely losing out in the event of three-way contests. Panel 4, moderated by Mr Geoffrey Pakiam, began with a presentation by Dr Lee Hock Guan entitled “Sabah: Cracks in BN’s Fortress”. He provided a description of Sabah’s unique political landscape, current developments and possible implications on the upcoming election. He mentioned three factors that contribute to the unique nature of Sabah’s political landscape. Firstly, the rampant and uncontrolled presence of phantom voters at polling stations, consisting of illegal immigrants and legalized illegal immigrants through Mahathir’s Project IC, had unnaturally added on to BN’s pool of supporters. Secondly, Sabah politicians’ tendency to frequently change their party loyalty has resulted a non-united front and uncoordinated efforts among the opposition parties. Thirdly, the massive number of ethnic and sub-ethnic groups provided the potential for electoral parties to be ethnicized when the majority Malay-Muslim UMNO entered Sabah’s politics in 1991, mainly between Muslim and non-Muslim Bumiputera. This resulted in BN transforming from a coalition of multi-ethnic parties to a coalition of ethnic parties. Dr Lee argued that the most important political development is the rise of Sabah Heritage Party (Warisan) led by Shafie Apdal (ex-UMNO Bajau-Suluk Muslim), that could potentially appeal to Muslim Bumiputeras, especially Bajau-Suluk, to switch their vote to the opposition.

Dr Lee Poh Onn presented on “Sarawak: A BN Safe Deposit?” He explained Sarawak’s present economy and demography, results from the recent parliamentary election in 2013 and state election in 2016, issues faced by Sarawak, and the implication of all these in the upcoming parliamentary election in GE14. Overall, he argued that BN would not face significant challenges in the election given the following factors. He also noted that Dr Mahathir and the new Pakatan Harapan may actually work in favour of the BN in Sarawak as many Sarawakians do not hold him in high regard. Lastly, he suggested three possible constituencies to watch in the coming months, namely Mas Gading, Bandar Kuching and Santubong. 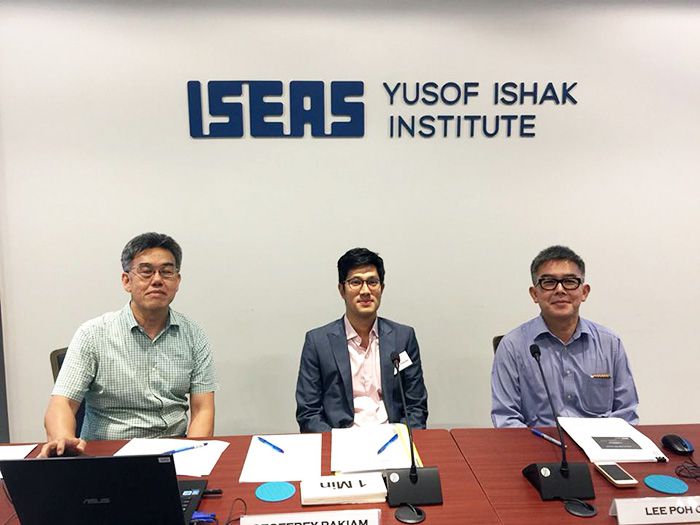