Thursday, 20 October 2016 – Twenty one scholars from fourteen countries convened at ISEAS – Yusof Ishak Institute for a two-day conference that explored new critical questions to do with the socio-political, cultural and economic positions of Chinese Indonesians in the post-Suharto era. Moving beyond conventional notions of assimilation, integration, and national belonging within the framework of ethno-nationalism in modern Indonesia, the conference was intended to be an ‘update’ of the contemporary history and ethnography of Chinese Indonesians within the contexts of post-Suharto reforms and the rise of China as a regional and global power. After opening remarks by Dr Hui Yew-Foong and Dr Charlotte Setijadi as the conference co-convenors, Dr Mary Somers Heidhues delivered the keynote lecture titled ‘The Long Half-Century of English-Language Studies of Chinese in Indonesia.’ Intended as a survey of Western scholarship of Chinese Indonesians over the past five decades, Dr Heidhues successfully set the scene for the conference by highlighting trends in studies of Chinese Indonesians so far, and pointing out the need for new theoretical frameworks to understand recent phenomena such as increasing cultural reorientation towards Mainland China among totok (‘pure’) Chinese, more diverse local and regional Chinese Indonesian identities, and greater transnational connections between overseas Chinese communities.

Session 1 grouped together three papers that explore transnational Christian Chinese identities in Indonesia. Analysing three different Christian denominations (charismatic, reformed and Roman catholic), the three speakers examined transnational Christian modes of identification as an alternative form of identity; one that not only provides a firm sense of belonging and (divine) security, but also one that legitimises the business practices of many Chinese Indonesian Christian entrepreneurs. After lunch, Session 2 continued with the topic of religion, but more about the construction of Chinese Indonesian as religious subjects, and how Chinese religions such as Confucianism, Taoism and other popular religions are represented in the public domain. The three speakers showed how historical perceptions of Chinese Indonesians cannot be separated from how they have been constructed in religious terms. Session 3 examined the controversial and often difficult topic of perceived differences between Chinese and non-Chinese (pribumi) Indonesians. The three speakers explored the linguistics and contexts and xenophobic speech, particularly the ways in which the language of ‘Othering’ shape Chinese-pribumi relations in the post-Suharto era. As the last session of Day 1, Session 4 examined the history of regional ethnic Chinese identities during the early years of Indonesia’s independence as a nation. Focusing on ethnic Chinese communities in North Sumatra and South Sulawesi, the two speakers discussed the tumultuous time period and the contributions made by various regional Chinese Indonesian actors in the fight for Indonesia’s sovereignty as a nation. Moderator and speakers for the final session, Regional Chinese Identities in the Early Years of The Republic (Source: ISEAS – Yusof Ishak Institute)

Friday, 21 October 2016 – The second day of the conference opened with Session 5 that examined ethnic Chinese intellectuals and writers both in the past and the present. The first speaker Dr Josh Stenberg (University of British Columbia) discussed the thriving world of Mandarin language literature in post-Suharto Indonesia while the second speaker Dr Taomo Zhou (Nanyang Technological University) discussed ethnic Chinese intellectuals who had close relations with the Chinese Communist Party in the 1950s and 60s. As the largest session in the conference, Session 6 consisted of four papers that discussed various contemporary regional Chinese Indonesian identities, ranging from Peranakan (acculturated) Chinese from East Java to Medan and Surabaya Chinese that each carved their own unique cultures. The four papers reiterated the importance of understanding Chinese Indonesians identities as heterogeneous and extremely diverse. Session 7 changed the focus to how China’s expansion into Southeast Asia affects Chinese Indonesians and Indonesia more generally as a nation. The three speakers discussed the relationship between Chinese Indonesian business networks and China, the influx of Chinese labourers into Indonesia, and new communities of Hui Muslim Chinese in Indonesian cities. This last session brought to the fore the reality that, within today’s interconnected world, it is important to understand the position of Chinese Indonesian in relation to greater global trends and in particular China’s rise in the world. 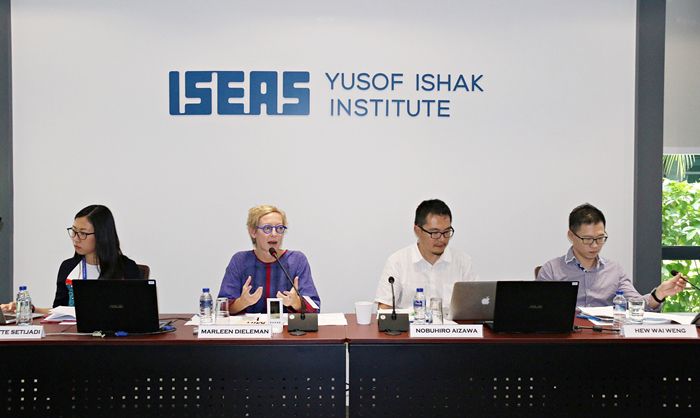 More than 70 individuals participated in the conference over the course of 2 days.