A+ A-
Originally published in 1982, Anthony Milner’s Kerajaan: Malay Political Culture on the Eve of Colonial Rule has become one of the most frequently-cited works on Southeast Asian History. On November 8th, Professor Milner launched the second edition of Kerajaan at the ISEAS – Yusof Ishak Institute.
NALANDA-SRIWIJAYA CENTRE LECTURE SERIES ‘1819 and Before: Singapore’s Pasts’

Tuesday, 14 August 2018 – Dr Andrea Acri, Associate Fellow at the Nalanda-Sriwijaya Centre (ISEAS) and Assistant Professor in Tantric Studies at the École Pratique des Hautes Études (PSL University, Paris), delivered his lecture on “Buddhist Accounts of Maritime Crossings in the Southern Seas”. This was the third instalment in the Nalanda-Sriwijaya Centre’s special series of lectures commemorating Singapore’s bicentennial anniversary, “1819 and Before: Singapore’s Pasts”. Dr Acri analysed the trope of the miraculous avoidance of shipwreck in Chinese, Sanskrit, and Tibetan narratives of Buddhist monks travelling across Asia by sea and highlighted elements of intertextuality and a similar motif in the Sejarah Melayu. More than 50 participants from local and overseas institutes of higher learning and research, non-profit societies, private firms, the government, the media, and the public attended this talk. 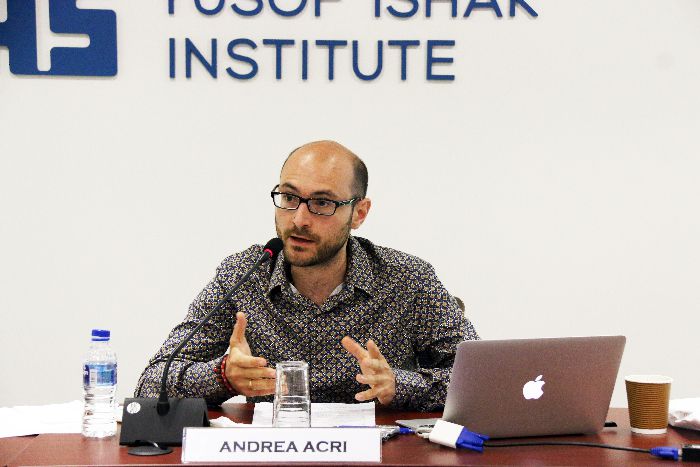 Dr Acri sought to contextualise Singapore as a historical and contemporary strategic node in Maritime Southeast Asia by comparing different texts from different contexts written in different languages. He began with the network of monks adhering to different schools of Buddhism who travelled between South Asia and East Asia. Most preferred the easier, cheaper, and safer maritime routes to the overland routes and stopped in Southeast Asia, where ideas, beliefs, and practices were exchanged and Buddhism flourished. Buddhist texts and monks’ (auto)biographies, such as those of Faxian and Atiśa, presented a mix of literary images and realistic, factual data indicating the perils of oceanic journeys and the setbacks that they encountered at sea, from imaginary, supernatural beings (e.g. marine monsters, nāgas) to mighty storms, unfavourable winds, pirates, and unskilled or unscrupulous crews.

Dr Acri explained how these travelogues feature recurrent, often well-known, literary tropes in Buddhist hagiographical literature: the monks carrying precious cargo (e.g. Sanskrit texts, Buddhist scriptures) on board mercantile ships, which the crews would try to cast overboard in hopes of calming storms to no avail; the monks managing to supernaturally calm the sea and save the ship by meditating and reciting scriptures, sometimes leading to intervention by protective deities. He also showed how these motifs have been found in other materials, including texts that the monks would have read, which serves as evidence of intertextuality and cross-pollination between genres. Furthermore, monks collaborated with one another, and oral transmission may have been at play. These accounts shuttle between imagination and reality, with actual practices in seamanship described alongside supernatural elements. Dr Acri shared how these were adapted for regional landscapes and incorporated into local beliefs, reflecting the concerns of traders and seafarers, such as the growth and propagation of “saviour cults” focusing on protective deities in coastal areas across the Buddhist world. He suggested that similar motifs in the Classical Malay chronicle Sejarah Melayu’s account of Sang Nila Utama’s sea voyage hints at its pre-Islamic heritage as a composite text drawing from Sanskritic material in a narrative cycle going back to Śrīvijaya. He pointed out that the trope recounting the need to jettison precious cargo (i.e. the protagonist’s supernaturally endowed possession) to calm the storm and avoid being shipwrecked is found in the monk Vajrabuddhi’s travelogue and Sang Nila Utama’s episode in the Sejarah Melayu, and that it could reflect a “magico-ritual” and a “royal” motif in the former and latter source, respectively. These authorised both protagonists’ lineages and legitimised their status in foreign lands, one as a tradition’s initiator, the other as a kingdom’s founder.

Dr Acri posited that the author of the Sejarah Melayu was inspired by earlier sources such as textual accounts and oral narratives popular during the Hindu-Buddhist period, reworking them to suit the Islamic fashion of the time. A lively Q&A session followed, where he shared about how older Malay manuscripts had Indic influences and Sanskritic elements possibly borrowed from late Tantric Buddhist cults, and that Vajrayāna Buddhism was present in the region before Mahāyāna Buddhism pervaded it and Theravāda Buddhism became popular with growing royal patronage. He also elaborated on the audience’s input on the importance of attending to the often neglected Malayo-Polynesian elements and Austronesian influences in Buddhist scriptures and Sanskrit texts, and noted that since the biography genre was well-established earlier in China but not in India, scholars have had to rely on Chinese hagiographies of Indian monks. 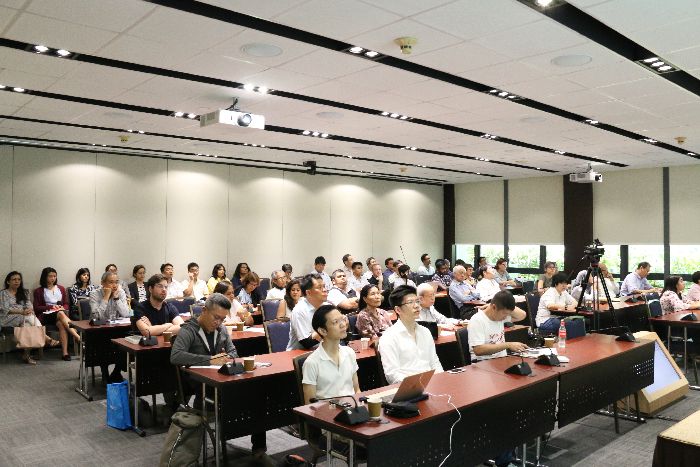 The discussion also allowed Dr Acri to talk about how the presence of other religions might have hindered the spread of Indic religions westwards, while the winds, merchant networks, and cultural commonalties facilitated their spread to Monsoon Asia; how factors besides the rise of Hinduism and Islam led to the decline of Buddhism in South and Southeast Asia with monks and artisans leaving monasteries and academies for East Asia; and how the cultural focus on the feminine in Southeast Asian religions led to the Bodhisattva Avalokiteśvara becoming a female goddess there, even though those on board merchant ships tended to be male. Finally, he shared about how famous monks recommended Śrīvijaya as a place of Buddhist learning for Chinese monks travelling to Nalanda to wait for the winds, learn basic Sanskrit, and speak to great masters, where texts were traded, translated, and discussed.