Dr Nicholas Farrelly’s seminar focused on the city of Naypyidaw and how its evolving role has both supported and accommodated Myanmar’s trajectory and politics of reform.

Wednesday, 2 March 2016 – Naypyidaw has been Myanmar’s capital for the past decade, yet very little is known about the city. It has been frequently dismissed by the media as a bizarre and artificial addition to the Myanmar landscape, while visitors have been caught up with the stereotypes used to describe as the capital: a ‘hollow shell’ and an expensive ‘white elephant’.
At a public seminar at ISEAS – Yusof Ishak Institute, Dr Nicholas Farrelly shed light on the little-known aspects of the city and argued that Naypyidaw has taken on roles that its detractors have failed to notice. In particular, it has become a microcosm of the country’s rapidly changing political, economic, and cultural environment. From analysing the inner-workings of Naypyidaw, and observing the interactions of people living and working in the city, Farrelly found that the city has ‘official logics’ that influence its operations and infrastructure, supporting and accommodating the country’s trajectory and reform. 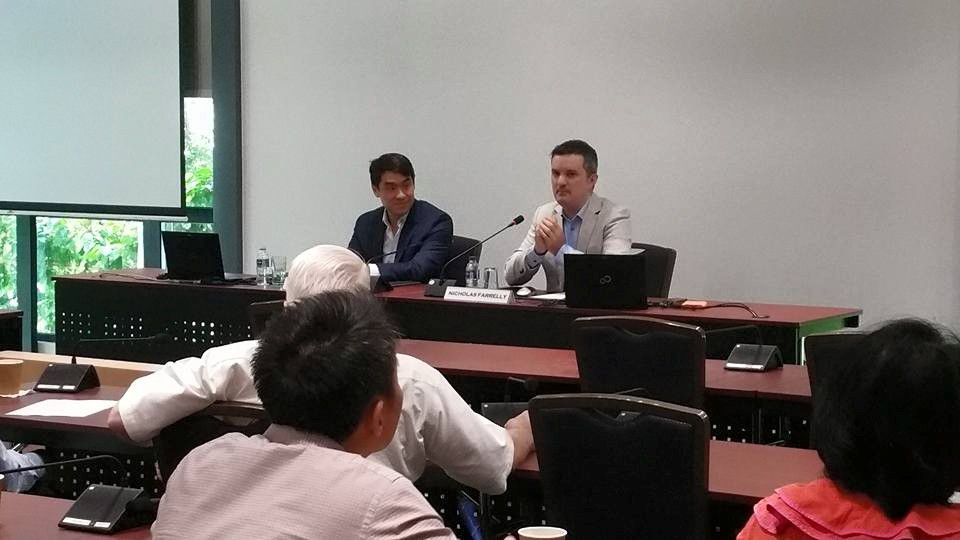 Even with the increasing role and influence of the National League for Democracy (NLD), Farrelly found that many dimensions of the city––engineered and designed by former military government and its successor, the Union Solidarity and Development Party (USDP)––continue to influence the trajectory of Myanmar’s reforms. Naypyidaw is an effort to construct a new narrative about the potency of the leadership and authority of Myanmar’s government. Officials view Naypyidaw as a site of purification: a pure city for emphasizing Myanmar’s glory. This glory is reflected in the city’s many grand spaces, such as the banquet hall in the city’s legislative compound that hosts visits from foreign dignitaries. A banquet hall in Naypyidaw, where members of the legislature are celebrating the end of another session with a grand lunch (Source: Dr Nicholas Farrelly)

Relocated from coastal Yangon to a hinterland area around ten years ago, Naypyidaw is an experiment in approaches that govern and galvanise Myanmar’s different ethnic groups. The brainchild of Senior General Than Shwe and the former military regime, construction has required huge investment. Although it stagnated for a while, the price of land is still strong; some people are expecting another mini boom in the property market. People have started investing their family’s wealth in the city’s properties, not only as homes for their families, but also as a commercial opportunity.
Farrelly felt that the question of why the capital was moved to Naypyidaw was not as important as the question of why the capital will survive. He noted that Myanmar has changed capitals 38 times (with some of these capitals existing concurrently) since 849 CE. Using these figures, the average tenure of a capital in Myanmar is around 52 years. Naypyidaw is currently in its 11th year of existence. A Union Solidarity and Development Party delegation takes in the action at a legislative assembly event in Naypyidaw (Source: Dr Nicholas Farrelly)

When asked if Naypyidaw has turned out as per original government plans, Farrelly suggested that information on Myanmar’s bureaucracy has been elusive because of the way the government was structured. Other countries who have had close relationships with Myanmar were consulted in secrecy during the early planning stages for the city. The level of secrecy around the construction of the city was such that even senior officials involved in particular projects and developments were not given information about how they fit with the broader blueprint of the city. Some of these officials did not even know the purpose for some of the projects that they were working on even after they were completed.
Farrelly described public service provision as “the fundamental and overarching logic for the city”. Government workers in the bureaucracy are ferried to their offices between 7am and 9am, and ferried back to official residences between 5pm and 7pm. They also spend a large amount of their time commuting from home to office, and usually live without their families in spacious apartments next to colleagues from the same ministries. They are usually only able to visit their family home (e.g. Yangon) during the weekends. Many of the middle-aged male officials do not buy their own food, but receive weekly supplies from family in Yangon or Mandalay.
Currently, the city’s workforce––many of whom are employed in administrative and technical jobs––commute weekly to visit their families in Yangon, the former capital. The weekly journey involves travelling along the infamous ‘Death Highway’, an expressway of poor quality that makes travel treacherous in certain (e.g. low-light) conditions. On Friday afternoons, this expressway is packed with buses ferrying people from Naypyidaw to Yangon. Farrelly reported that the 115-mile rest stop along the expressway is a popular place to socialise and network. This rest stop not only provides the opportunity to freshen up and purchase refreshments, it is also perceived as a safe space for interactions with people that one may not have the chance to speak with during official working hours. Farrelly observed that Naypyidaw’s power-brokers gather in conversation at this rest stop on Fridays. It is also a chance for young officials to make introductions and cultivate connections. This location is an important site for field observations.
According to a 2014 census, 1,160,242 people live in Naypyidaw, of which only 32% live in the urban parts of the city. This underscores the ‘work-in-progress’ state of the rural to urban transformation of Naypyidaw. Only 2.25% of the national population live in Naypyidaw. ‘Naypyidawrians’ lead similar lifestyles to people in other regions. 42% of households use electrical lighting, higher than in Yangon.
There are large and vibrant populations of people from different minority groups in Naypyidaw, but the majority Bamar ethnic group are privileged and prioritised. There is also an intensely steep hierarchy in Naypyidaw society. People of the lower echelons are constantly reminded that much of the city is off-limits to them (e.g. military zone of Pyinmana and Zeyathiri). Naypyidawrians often wear clothing that provide them with access and eligibility, especially uniforms that indicate their status and rank.
With growing affluence and living standards in Naypyidaw, Farrelly said that there is now the emergence of a middle class as well as the first generation of people born and bred in this new capital. He notes that the young lives, who live close to the centre of power, will be shaped and influenced by the country’s shifting political and economic landscape and can be influential on the country’s future. Four seats (Zabuthiri, Dekkinathiri, Pobbhathiri, Ottharathiri) in Naypyidaw were contested in the April 2012 by-election. These seats were held by four of the most important power-brokers from the State Peace and Development Council (SPDC) government who eventually also became senior members of the USDP. However, in the by-election, the USDP lost all four seats to the opposition National League for Democracy (NLD).
The NLD won 7 of 8 available seats in Naypyidaw in the 2015 elections, losing Zeyathiri to a USDP candidate because that district is the military’s stronghold. Farrelly felt that the vote-swing in the Naypyidaw seats revealed the changing sentiments of the large population of civil servants in the city.
Naypyidaw is becoming viewed as more ‘fashionable’ now since the NLD won seats in the city, but there is still a prevailing ambivalence about the place. The NLD has a large number of novice members of parliament who will need some time to be habituated to the legislative system and culture of Naypyidaw.
When asked about how the shift in capital city changed the country’s political dynamics, Farrelly replied that the main difference was that now all of the key institutions for the country are in Naypyidaw. Unlike before, business with the government can now only take place there. The NLD will struggle with this reality, and this is where debates about the military’s 2008 constitution will return to the fore.