A+ A-
The third and final public lecture to commemorate ISEAS’s 50th anniversary was delivered by Professor Wang Gungwu on 3 October 2018 at the Orchard Hotel.
ISEAS – YUSOF ISHAK INSTITUTE 50TH ANNIVERSARY PUBLIC LECTURE

The third and final public lecture to commemorate ISEAS’s 50th anniversary was delivered by Professor Wang Gungwu on 3 October 2018 at the Orchard Hotel. Entitled “Before Southeast Asia: Passages and Terrains”, Prof Wang, who is also the Chairman of ISEAS’s Board of Trustees, took the audience on a grand tour of Southeast Asian history spanning from pre-16th century to contemporary Southeast Asia. He also spoke of the versatility and adaptability of local Southeast Asian communities and the eventual establishment of a regional entity in the shape of the Association of Southeast Asian Nations (ASEAN). 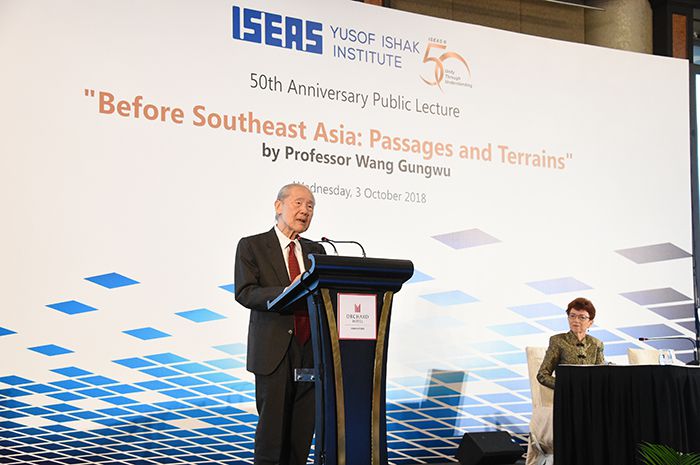 The lecture was chaired by Professor Barbara Andaya who, in her opening address, recounted the expansive accomplishments of Prof Wang as a renowned scholar who left an indelible mark on Southeast Asian scholarship. Prof Andaya recalled her first encounter with Prof Wang’s scholarly work in 1966, when she was tasked to study Prof Wang’s MA thesis on the Nanhai trade. Prof Wang’s thesis covered ten centuries of early Chinese commerce with the Southern Seas and stressed the view that trade then was not merely seen as an exchange of goods but as a basis to provide a lasting intercourse of ideas. Due to Prof Wang’s travels and experiences that took him from Ipoh to Nanjing, Hong Kong, London, Canberra and to Singapore, Prof Andaya described Prof Wang’s work as a bridge not just between societies and cultures but between academic discussions such as history and international relations, and history and archaeology. Prof Wang’s work had undoubtedly been instrumental in raising the profile of Southeast Asian studies over the decades and the impact of his legacy continues till this day. Prof Wang postulated that the study of Southeast Asian history could be broken down into three periods.

The first period was prior to the 1500s when the region was diverse with varied terrains and multiple passages of entry with its peoples scattered across this expansive landscape. The people of Southeast Asia were highly fragmented and none of them possessed the capability to come together to form a unified political entity. The reason for this, Prof Wang explained, was that its peoples did not see a need to pool their resources and band together due to their openness to external influences, which allowed them to form special relationships with others without the need for a regional system. This also meant that Southeast Asians were open to foreign cultures from the West which led them to adopt concepts of religion, literature, art and architecture, and combined these with their own cultural ideas and values which have precipitated into the values that we find commonplace in Southeast Asian nations today. More importantly, the region demonstrated an openness toward migration and trade from outside.

Things began to change in Southeast Asia during the 1500s, which Prof Wang defined as the second period. It was during this period that some semblance of Southeast Asia as a region emerged as external forces began to find it convenient to group Southeast Asia together as a region. Compared to the vastness of the Indian Ocean, the South China Sea was a smaller and more manageable geographical area that also provided useful connections throughout the region and to other parts of the globe. It was during this period that the Mongol expansion into China led to increased migration from China into mainland Southeast Asia, and by the 16th century, the arrival of Europeans changed the landscape again with modern innovations in maritime technology that enabled colonisation to expand deeper into mainland Southeast Asia. The era of colonialism by various European powers fragmented the region as each colonial power sought to delineate geographical borders for their own purposes; impeding the formation of Southeast Asia as a region. 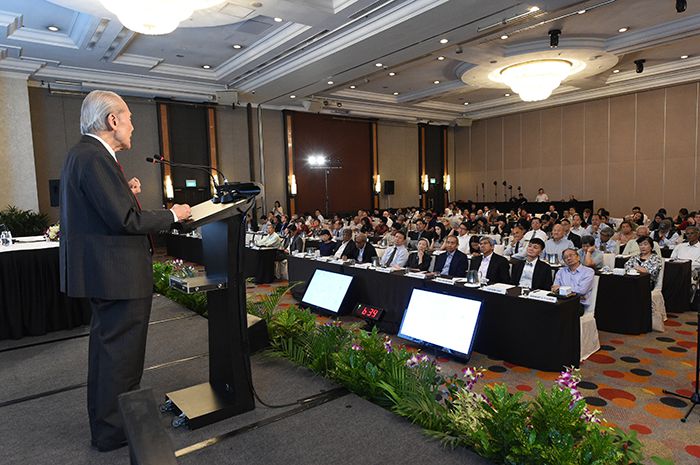 From that point forward, literature on Southeast Asia flourished through the publication of history and geography books on the region. Globally, scholars became fascinated with the region and took up the challenge of defining Southeast Asia not merely in spatial concepts but in its history, identity and its significance as a geographical region of its own. In the ensuing decades of the 20th century, a number of milestone events solidified Southeast Asia’s regional status. Prof Wang described this third period as a new turning point for the region as the United States emerged as the sole superpower, the rise of China was on the horizon, and with the composition of ASEAN expanding from five to ten member states, Southeast Asia had become a true regional body in its own right.

The age of globalisation has also brought about new challenges for ASEAN and Southeast Asia as a region. As ASEAN member states had spent much of the last six decades focusing on nation-building efforts, constrained by the legacies of colonialism, contemporary Southeast Asian nation-states have had to exercise tremendous care and sensitivity in managing differences within their countries, as well as those with their neighbours. Consequently, there now exists a tension in the region between the concepts of a modern nation-state and a regional bureaucratic body. Thus far, this tension has been well-managed through compromise and collaboration to achieve consensus within ASEAN.

In concluding his lecture, Prof Wang reiterated that, from the beginning, Southeast Asia had benefitted from its openness to external influences and to pick and adopt different values from foreign cultures. This openness is what makes Southeast Asia unique and it remains a strength on which the Southeast Asian nations can harness to strengthen the regional bonds that unifies them, and create new opportunities for Southeast Asia as a region in the future ahead.