The ASEAN Studies Centre of ISEAS – Yusof Ishak Institute held the 34th ASEAN Roundtable with the theme “Opportunities and Challenges in Uncertainty.” The Roundtable took a reflective and analytical look at the outcomes of the 35th ASEAN Summit and Related Summits held in Bangkok from 2-4 November. ASEAN Studies Centre A group photo of the speakers and moderators of the seminar. (Credit: ISEAS – Yusof Ishak Institute)

Monday, 9 December 2019 – The ASEAN Studies Centre of ISEAS – Yusof Ishak Institute held the 34th ASEAN Roundtable with the theme “Opportunities and Challenges in Uncertainty.” The Roundtable took a reflective and analytical look at the outcomes of the 35th ASEAN Summit and Related Summits held in Bangkok from 2-4 November. The Roundtable’s discussion focused on four pressing ASEAN geopolitical and economic integration issues: (1) territorial security in the South China Sea, (2) the Regional Comprehensive Economic Partnership (RCEP), (3) US-China trade war implications, and (4) the major power rivalry between the US and China in the region. 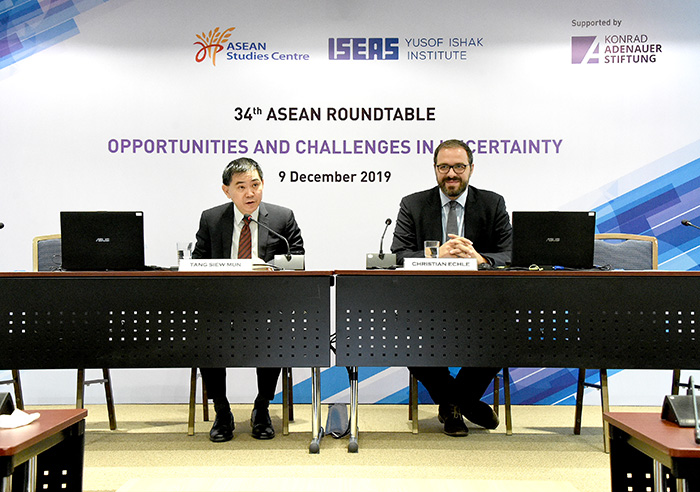 In the Opening Remarks, Mr. Choi Shing Kwok, Director of the ISEAS – Yusof Ishak Institute, in a speech read out by Dr. Tang Siew Mun, addressed the challenges for ASEAN stability and prosperity due to geoeconomic and geopolitical uncertainties. However, Mr. Choi emphasised that ASEAN has made substantial progress in the past few years, such as the commencement of the Code of Conduct (COC) negotiations, the declaration on the ASEAN Outlook on the Indo-Pacific (AOIP), and the Regional Comprehensive Economic Partnership (RCEP). Nevertheless, he reiterated that ASEAN must be proactive, maintain its centrality, and demonstrate its leadership amidst geopolitical challenges. Mr. Christian Echle, Director of Regional Programme Political Dialogue Asia at the Konrad Adenauer Stiftung (KAS), underlined the opportunities to enhance ASEAN integration despite global political tensions. Mr. Echle also shared the findings of the “ASEAN Security Connectivity” research project which highlighted three main policy recommendations for strengthening ASEAN integration: (1) abolishing unanimity requirements for ASEAN statements and communiqués, (2) institutionalising the regular review of ASEAN decision-making principles, and (3) enhancing mini-lateral formats on specific issues without losing ASEAN ownership. The Roundtable got off to a rousing start with the first session on “A Code of Conduct in the South China Sea: A Panacea or Poison Pill?”, which examined three ASEAN member states’ perspectives on the ongoing COC negotiations between ASEAN and China to mitigate territorial and maritime disputes in the South China Sea. The speakers underlined four imperatives to maintaining stability in these contentious waters: (1) adhering to the United Nations Convention on the Law of the Sea (UNCLOS), (2) maintaining the current territorial status on the sea while preserving the autonomy of the claimant states, and protecting these territories from occupation, (3) promoting dialogue with external partners to build robust discussions, and (4) exercising self-restraint over activities that would ignite disputes between claimants. Furthermore, the panel asserted the need for ASEAN to be proactive in taking concrete actions beyond the COC. In session two, “RCEP: So Near, Yet So Far”, the speakers discussed the opportunities and challenges of RCEP, which is lauded as the largest free trade agreement in the world, involving 10 ASEAN member states, Australia, China, Japan, New Zealand, and the Republic of Korea. The experts noted that India’s decision to not join the trade pact is a significant setback to its strategic engagement in ASEAN. The discussion underlined that for RCEP to be successful, it must balance the present needs and future trade projections of the participating countries. As far as Australia is concerned, RCEP offers a premise to consolidate and streamline trade activities with ASEAN rather than with ten individual ASEAN countries. One panelist highlighted that India’s considerations to withdraw from RCEP is caused by various factors, mainly the concern that a surge of imported products that would possibly hurt small businesses and farmers in the country. From RCEP, the discussion shifted to the ongoing US-China trade war. Session three of the Roundtable, entitled “The US-China Trade War: Implications for Southeast Asian Economies,” examined the impact of the US-China trade war on the region and the responses of selected ASEAN member states. The speakers underlined that the trade dispute has spurred divestment from China into ASEAN as firms seek alternatives to mitigate risks associated with the escalating trade war.  The panel noted that Vietnam appears to be the largest beneficiary of the trade war and it will continue reaping benefits as long as the country can continue improving its capacity in strategic competition, adaptability, and economic resilience. Malaysia and Indonesia stands to enjoy greater gains if their respective governments are able to boost investment attractiveness. The 34th ASEAN Roundtable was concluded with a session on “China or the US: A False Choice for ASEAN?”. The panelists discussed the dynamics of ASEAN member states’ responses to pressures of having to “choose sides” amidst rising major power rivalry. The panelists argued that it is not feasible for ASEAN or its member states to align themselves with either major power, notwithstanding the fact that some member states have close economic and security ties with China and the US. At the same time, the US-China tensions should be seen as an opportunity and impetus for strengthening ASEAN regionalism. ASEAN must remained united to withstand the pressure of the US-China major power rivalry.

Dr. Tang Siew Mun delivered closing remarks with a warm note of thanks and appreciation to the panelists and participants for the active and robust discussion throughout the day, and thanked KAS for their long-standing support for the Roundtable and to the ASEAN Studies Centre.