Malaysia’s long wait for the appointment of its full cabinet is finally over. Thirteen ministers and twenty-three deputy ministers were sworn-in before the Yang Di-Pertuan Agong, Sultan Muhammad V on 2 July 2018. This was a significant milestone for the new Pakatan Harapan government, which brought an end to 54 days of uncertainty following the coalition’s unexpected victory at the polls.
The Mahathir Cabinet consists of 24 ministries and two ministers in the Prime Minister’s Department in charge of religion and law. Three ministries – (a) Energy, Green Technology and Water, (b) Plantation Industries and Commodities and (c) Higher Education – under the Najib Cabinet were either dropped or restructured. Three new ministries, namely Economic Affairs, Entrepreneur Development, and Primary Industries, were established.  A third portfolio at the Deputy Minister level was created under the Prime Minister’s Department for “National Unity and Social Well-Being.”
The Cabinet chalks up five groundbreaking talking points: (a) oldest Prime Minister (Mahathir Mohamad), (b) oldest Cabinet member (Mahathir Mohamad), (c) youngest minister (Syed Saddiq Syed Abdul Rahman, 25), (d) first female Deputy Prime Minister (Wan Azizah Wan Ismail) and (e) highest number of female ministers (5). The average age of the Cabinet members is 55.5 years. Five of the 27 member Cabinet members do not have any parliamentary experience. The cabinet line-up and appointment of deputy ministers provides some interesting insights into the state of coalition politics between Pakatan Harapan and Parti Warisan Sabah (Warisan).
The biggest winners in the latest round of appointments were the “smaller” parties, namely, Parti Pribumi Bersatu Malaysia (PPBM), Parti Amanah Negara (Amanah) and Warisan. Collectively, these three parties contributed 31 (25.6%) seats to Pakatan Harapan’s 121 tally in the Parliament. However, they have more cabinet positions (14) than PKR and DAP combined (13) (refer to Table 1). This imbalance is less stark when the deputy minister appointments are taken into account. PKR and DAP hold 28 out of 50 (56%) minister and deputy minister positions while the “smaller” parties won 22 appointments (44%), including the Prime Minister portfolio.  In addition, PPBM, Amanah and Warisan MPs were entrusted with the responsibility of holding some of the most important and sensitive ministerial portfolios, namely, home, defense, education, health and the “de facto ministries” of law and religion. 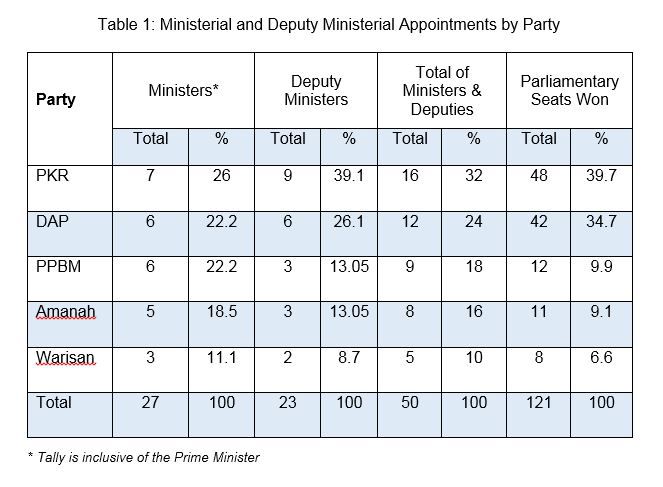 Warisan was the other clear winner. It contributed 8 seats to support the coalition and was rewarded with 3 minister and 2 deputy minister posts. In comparison, none of the 6 Sabahan PKR and DAP parliamentarians made it on to the minister and deputy minister lists. It is almost the same case with Sarawak where DAP and PKR won 10 seats but were only awarded with one ministerial appointment. Warisan’s strong hand stems from the fact that its parliamentarians holds the key to ensuring the stability of the Pakatan Harapan government. Without Warisan’s 8 votes, Pakatan Harapan’s majority in the Parliament will be reduced to a razor thin 2 seats. This analysis does not take into account independent MPs who have declared their support for Pakatan Harapan.
Warisan President Shafie Apdal’s gamble of striking off on its own instead of joining one of the Peninsula Malaysia-based parties (PRK and DAP) has paid off handsomely in securing a strong Sabah voice in the new cabinet. More importantly, Mahathir’s decision to overlook Sabahan PKR and DAP MPs is a tacit acknowledgment that Warisan is the party that represents and speaks for Sabah. This lesson affirms the relevance of state-based parties and strengthens their positions vis-à-vis Peninsula-based parties. In this respect, PPBM may have a mountain to climb with its new foray into Sarawak.
No doubt, PKR and DAP supporters would be deeply disappointed in not securing a bigger share of the Cabinet appointments, and may even criticise their leaders for acquiescing to Mahathir and the smaller parties. This mindset would have sat well with the Barisan Nasional coalition system, which is based on a hierarchical pecking order with UMNO on the top, followed by MCA, MIC and other component parties. Mahathir’s cabinet appointment breaks “senior-junior partner ala Barisan Nasional” mould, and instead introduced a new convention based on equality. It is to PKR and DAP’s credit in not demanding more posts, which is no doubt a strategic decision taken to keep the peace and strengthen unity within the coalition. The “concessions” made by PKR and DAP were intended to lock the “smaller parties” into Pakatan Rakyat coalition as the future of the coalition is contingent on the continued support of the “smaller parties.”  This new power dynamic levels the playing field for all parties and mitigates the chances of the rise of a single dominant force within the Cabinet.  The diffused power structure within the Cabinet ensures, at least in theory, that decision-making will be a collective venture.  Pakatan Harapan is playing the long game of strengthening the coalition by growing a strong sense of ownership with an eye toward the 15th General Elections.
Dr Tang Siew Mun is Senior Fellow at the Regional Strategic and Political Studies Programme, ISEAS-Yusof Ishak Institute.
The facts and views expressed are solely that of the author/authors and do not necessarily reflect that of ISEAS-Yusof Ishak Institute. No part of this publication may be reproduced in any form without permission.