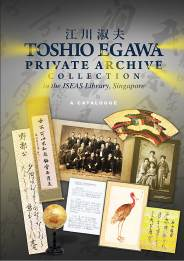 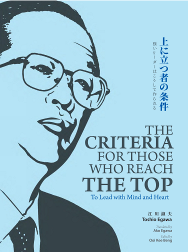 Toshio Egawa (born on 4 November 1935), is a businessman, author, journalist, art collector and karate martial artist. His business career led him and his family to travel extensively and reside in Singapore, London, England, New York, Los Angeles and Frankfurt.

In September 2016, Mr Toshio Egawa gave his life-long private archive collection to ISEAS Library. This followed an earlier and generous donation of close to 1,000 publications in 2010. The core of this new collection includes 508 reference books that he had consulted for his own research; over 1,000 pieces of calligraphic works, historical letters and manuscripts, first day covers, photographs and paintings related to prominent figures in Japan predominantly Meiji-Taisho period; and some 500 research notes in manuscript form, ranging a wide spectrum of subjects including history, philosophy, economics, and arts. This catalogue serves as a gateway to the study of many aspects of Japanese history and culture, from the eyes of Toshio Egawa.

2. The Criteria for Those Who Reach the Top: To Lead with Mind and Heart

This book was written as a self-reflection based on Mr Egawa’s early training in karate martial arts and personal experiences as a businessman operating in many parts of the world. His deep concern for principled and effective leadership in business, and his value system emphasizing on qualities like trust, honesty and compassion as an individual resonate throughout his writing.

This book was originally published in Japanese in 2001 (Ueni-Tasumono-no-Joken) by Diamond Inc., and in Korean in 2005 by Random House Joong Ang. The first three chapters of this book were translated into English and Finnish, and published on a prior occasion. Mr Egawa’s daughter, Ako, who translated the first three chapters into English, completed translating the remaining four chapters. Dr Ooi Kee Beng, former Deputy Director at ISEAS–Yusof Ishak Institute, edited this volume.

Dr Koji Nakajima and Mr Hideaki Fujita are representatives from Japanese Research Team of Toshio Egawa Private Archive Collection. Dr Nakajima is Associate Fellow at ISEAS – Yusof Ishak Institute and Visiting Professor at Center for Liberal Arts of Meiji Gakuin University. Mr Fujita is a researcher at Tokugawa Institute for the History of Forestry and Lecturer at Gakushuin Women’s College. Both Mr Fujita and Dr Nakajima have been working on Toshio Egawa Private Archive Collection since May 2017, conducted preliminary research, analysis and decipherment of selected historical documents.

Dr Ooi Kee Beng is the Executive Director of Penang Institute and Senior Fellow at ISEAS–Yusof Ishak Institute. He was also ISEAS’ Deputy Director from 2011 to 2017.
Dr Ooi received his PhD in Sinology from Stockholm University. He has edited many books and has written numerous biographies.

Registration
For registration, please fill in this form and email to karthi@iseas.edu.sg by 6 November 2017.