The Role of Fisheries in Vietnam’s South China Sea Strategy 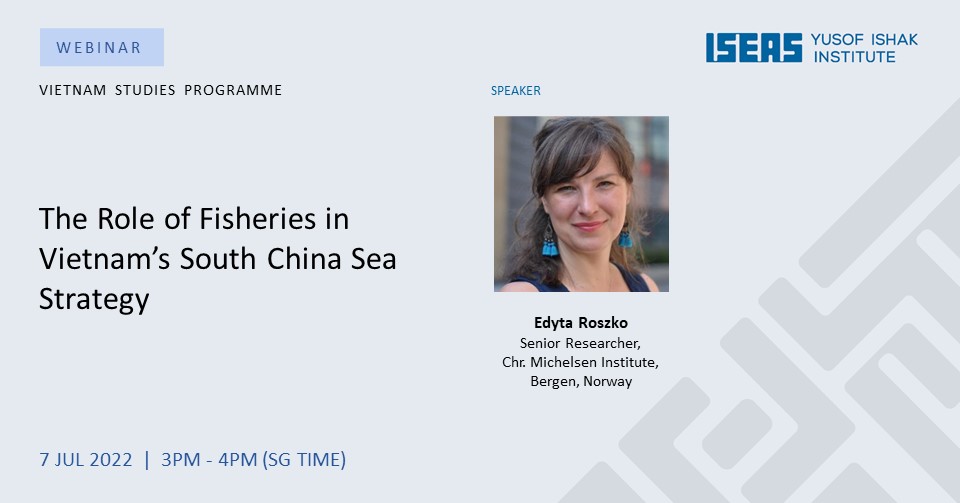 China’s teritorial and jurisdictional claims to most of the South China Sea (SCS) overlap with the 200-nautical-mile Exclusive Economic Zone of several other littoral states. This results in a situation where marine resources function as ‘rival goods’ indexing territorial sovereignty and national maritime jurisdiction, particularly between Vietnamese and Chinese fisheries. Political scientists and economists have argued that subsidized and militarized fishers in the SCS are simply acting as instruments of their states’ geopolitical agendas, responding to their policies, regulations and incentives. Looking specifically at Vietnam and taking an anthropological approach, this webinar shows that while subsidized, militarized and state-supported fishers are at the forefront of Vietnam’s SCS claims, they are also mobile maritime actors who navigate not only the seas, but also economic opportunities and constraints afforded by changing technologies and geopolitical configurations. Their fishing performance becomes an asset that they are willing to use on behalf of, or in contravention to, the state.

Edyta Roszko is Senior Researcher at the Chr. Michelsen Institute in Bergen, Norway, and Fellow of the Young Academy of Europe. Edyta’s research takes a broader anthropological perspective on oceanic commons, heritage, religion, maritime disputes, fisheries and militia in relation to and beyond territorially-bounded states and security interests. Her newly awarded European Research Council (ERC) Starting Grant project Transoceanic Fishers: Multiple Mobilities in and out of the South China Sea at Chr. Michelsen Institute expands her geographic field beyond Vietnam and China to include other global regions in Oceania and West and East Africa. Edyta is the author of Fishers, Monks and Cadres: Navigating State, Religion and the South China Sea in Central Vietnam co-published by NIAS and the University of Hawai’i Press. The book is currently available through Open Access at: http://hdl.handle.net/10125/76750.