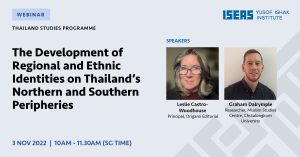 Despite Thailand’s extreme political and administrative centralization, diverse regional and ethnic identities have become increasingly visible in the country. Those identities are in no way primordial; they have histories.

In Northern Thailand, the diverse upland and lowland peoples of Lanna, longtime allies of the Siamese, have forged an identity known as Khon Mueang. After the 1886 marriage of Lanna Princess Dara Rasami (1873-1933) to King Chulalongkorn, Thailand rapidly assimilated Lanna into the Bangkok-centred nation-state, despite widespread rebellions and resistance to Thai authority. The resultant relationships and developments continue to inform Northern Thai identity today.

Among Muslims in Southern Thailand, the efforts of the Bangkok state to impose a Thai Islam identity and ethnonym have been principally responsible for a process of ethnogenesis and ethnic change. This process has resulted in declining identification as Orang Melayu and in considerable Malay language loss. Historical research and fieldwork conducted in Chana District, Songkhla Province, illustrate the unfolding of these processes.

The often surprising histories of regional and ethnic identities in Thailand are crucial to their contemporary salience, as provincial-metropolitan divides figure so importantly in the country’s affairs.

Leslie Castro-Woodhouse holds a doctorate in history from the University of California at Berkeley and is the author of Woman between Two Kingdoms: Dara Rasami and the Making of Modern Thailand (2021). She is the principal of Origami Editorial, a consultancy for scholars.

Graham Dalrymple is a doctoral candidate at the National University of Malaysia and researcher at the Muslim Studies Centre, Chulalongkorn University. His current research concerns Sufism among Thai-speaking populations of Southern Thailand.