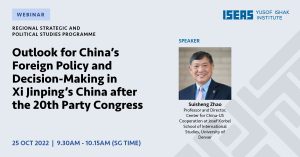 Xi Jinping is expected to secure his third term as the Chinese Communist Party’s general secretary at the 20th Party Congress on 16 October, against the backdrop of socio-economic woes at home and an increasingly hostile and volatile strategic environment as the US-China rivalry intensifies and spills over into new and critical sectors. This webinar will discuss the prospects for China’s foreign policy and decision-making following the 20th Party Congress as Xi further consolidates his power. He has centralised foreign policy-making authorities by setting up new central coordination organisations with himself at the head to bypass entrenched interests and cut through bureaucratic roadblocks. Having staked his claim to power over the Chinese Communist Party (CCP) and by demanding the personal loyalties of Chinese bureaucrats to an extent that none of his recent predecessors could, Xi has introduced a top-centric decision-making structure for developing Beijing’s strategic vision, conducting strategic planning, and making tough choices. Xi’s personalisation of Chinese foreign and security policymaking has and will raise the stakes – and the risks – of China’s foreign policy posture and actions in the years to come.

Suisheng Zhao is a Professor and Director of the Center for China-US Cooperation at Josef Korbel School of International Studies, University of Denver. He is the founder and editor of the Journal of Contemporary China and the author and editor of more than two dozen of books, including A Nation-State by Construction: Dynamics of Chinese Nationalism. His forthcoming book is titled The Dragon Roars Back: Transformational Leaders and Dynamics of Chinese Foreign Policy (Stanford University Press). A Post-Doctoral Campbell National Fellow at Hoover Institution of Stanford University, he received his Ph.D. degree in political science from the University of California-San Diego, M.A. degree in Sociology from the University of Missouri, and BA and M.A. degrees in economics from Peking University.