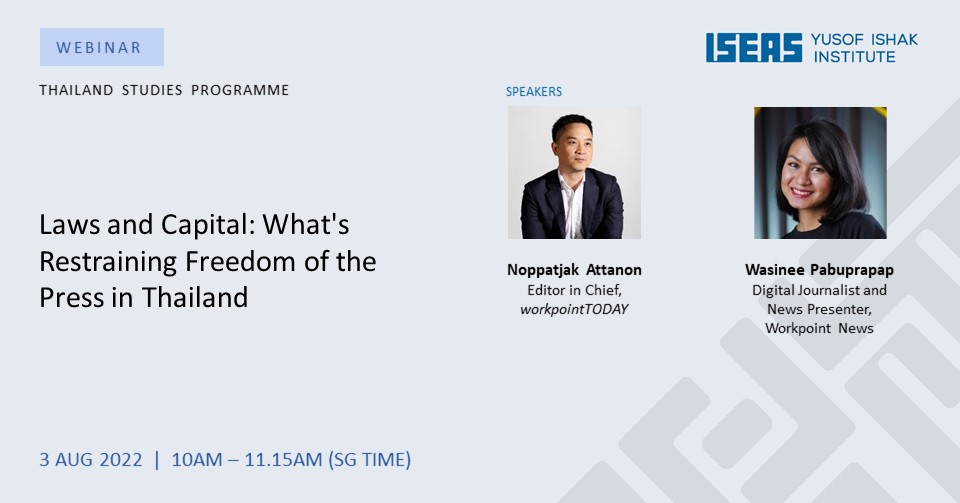 Laws and Capital: What’s Restraining Freedom of the Press in Thailand

Press freedom in Thailand has been decreasing, particularly following the 2014 coup d’état. The media and journalists have been subjected to a variety of actions aimed at silencing them, ranging from “attitude modifications” to legal harassment and physical violence. Apart from the tangle of legal frameworks that military networks use to control the media, economic concerns also put the Thai media in jeopardy.

Thai media have struggled with digital upheaval. Competition in television and the rise of Internet media have shaken advertising revenues and pushed the media into a resource-constrained condition. Political and economic pressures also push many Thai media toward sensationalism.

Some media outlets are looking for solutions to these challenges. One such solution is small media outlets’ efforts to raise independent financing.

Noppatjak Attanon is Editor in Chief of workpointTODAY, a pioneering online Thai news publisher with more than 10 million followers. A former Chevening scholar, he worked with BBC Thai in London and now leads a team of more than 20 journalists covering politics, economics, business, world affairs and human rights.

Wasinee Pabuprapap is a digital journalist and news presenter at Workpoint News, a digital media outlet covering current affairs and culture from the perspective of the new generation, and a member of the Thai Journalists Association subcommittee on rights, freedom and media reform. Her work on gender-based violence was recognized in Thailand’s 2019 Digital News Excellence Awards competition.