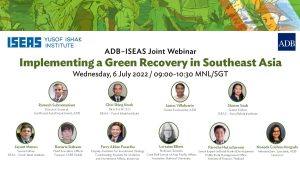 As countries begin to recover from the coronavirus disease (COVID-19) pandemic, policy makers must decide what type of economic recovery they want to pursue. Will they choose measures that continue with existing “business-as-usual” economic structures that have a negative impact on the environment? Or will they take up the challenge of rebuilding in a way that ensures an economically and environmentally resilient future.

A green recovery approach is crucial for Southeast Asia in addressing the worsening impacts of climate change and biodiversity loss and strengthening the region’s long-term competitiveness. Among the green growth opportunities that have significant economic potential in terms of creating jobs, reversing environmental damage, and achieving the sustainable development goal targets are: productive and regenerative agriculture, sustainable urban development and transport models, clean energy transition, circular economy models, and healthy and productive oceans.

Organized by the Asian Development Bank (ADB) and the ISEAS – Yusof Ishak Institute (ISEAS), the webinar will examine how these green growth opportunities can be harnessed as governments increasingly recognize the need for policy measures that focus on environmental sustainability, climate change, and disaster preparedness.

Ramesh Subramaniam oversees the Asian Development Bank (ADB)’s relationship and public sector work (including all technical assistance, knowledge generation and dissemination, and grant and loan projects) in all countries of the Association of Southeast Asian Nations (ASEAN). He is also in-charge of ADB’s support for all sub-regional cooperation initiatives in the region, including ASEAN, Brunei-Indonesia-Malaysia-Philippines East ASEAN Growth Area, Greater Mekong Subregion and Indonesia-Malaysia-Thailand Growth Triangle. With ADB for over 20 years, Ramesh has worked on several projects across the Asia-Pacific region. Infrastructure financing is among his primary areas of interest. He represents ADB on the World Economic Forum’s Global Future Council on long term investment and infrastructure development. He has a Ph.D. in Economics from McMaster University (Canada), and has had post-doctoral fellowships in development economics and corporate finance and industry at Yale University (USA) and University of St. Andrews (UK).

Choi Shing Kwok is the Director & CEO of the ISEAS-Yusof Ishak Institute, which does research on political, economic and socio-cultural developments in Southeast Asia. He is also the Chairman of SP Services Limited, an energy services company, and a board member of the St Andrew’s Mission Hospital, a medical charity. In addition, he also serves on the National Records Advisory Committee in the Ministry of Communications and Information, and the Management Board of the Singapore Nuclear Research & Safety Initiative in the National University of Singapore. Before his retirement from the civil service in October 2017, Shing Kwok was the Permanent Secretary of the then Ministry of the Environment and Water Resources (MEWR) for 5 years. He also served 7 years as the Permanent Secretary of the Ministry of Transport and 9 years in a senior position in the Ministry of Defence earlier in his career. During his military service, Shing Kwok held a variety of command and staff appointments in the Singapore Armed Forces (SAF).  Promoted to Brigadier-General in 1996, he took early retirement from the SAF in 2000 to join the Administrative Service. Shing Kwok obtained his Bachelor and Master’s degrees in Engineering Tripos from Cambridge University in 1981 and 1985 respectively.  He also received a Master of Public Administration degree from Harvard University in 1994 as an Edward Mason Fellow. During his public sector career, Shing Kwok was awarded the Public Administration Medal (Silver) in 1993 and the Meritorious Service Medal in 2000.

James Villafuerte is a senior economist at the Southeast Asia Regional Department (SERD). He conducts research on economics and regional cooperation issues in Southeast Asia, and also leads the SERD Policy Network of economists. He regularly writes economic outlook and risk assessment for Southeast Asia, and also examine its medium-term macroeconomic outlook, policy, and development issues—including COVID-19 economic recovery, global value chain participation, green economy, among others. His advisory and research expertise also cover economic modelling, financial integration, macroeconomic surveillance, and early warning systems. Prior to joining ADB, he was an economist at the World Bank and senior economist at the Department of Treasury and Finance in Victoria, Australia.

Sharon Seah is the Senior Fellow and the Coordinator of ASEAN Studies Centre (ASC) and Climate Change in Southeast Asia Programme (CCSEAP), ISEAS-Yusof Ishak Institute, Singapore. Her research interest lies in Climate governance in ASEAN; survey of climate attitudes in Southeast Asia; and understanding the rule of law in ASEAN. Prior to joining the ISEAS Yusof – Ishak Institute, Ms Seah was Associate Director of the NUS Centre for International Law. She has spent 14 years in the National Environment Agency and Ministry of Foreign Affairs prior to entering academia, including a diplomatic posting to the Singapore Embassy in Bangkok, Thailand from 2003 to 2007. Ms Seah maintains an interest in climate change and environmental issues; multilateralism and ASEAN development. Ms Seah graduated with a Master in Public and International Law from the University of Melbourne in 2018.

Jayant Menon is Senior Fellow at the Regional Economic Studies Programme, ISEAS – Yusof Ishak Institute. At ISEAS, he plans to continue his work on trade and investment issues and economic development in the Asian region. His last post was at ADB as Lead Economist in the Office of the Chief Economist. He was also at the ADB Institute in Tokyo from 2005 to 2008. He started work as an academic in Australia, spending almost a decade at the Centre of Policy Studies at Monash University at its original campus in Clayton, Melbourne. He has also worked at the University of Melbourne, Victoria University, and the American University in Washington, DC. He holds adjunct appointments with the Australian National University, University of Nottingham, UK and IDEAS, Malaysia.

Bonaria Siahaan is Chief Executive Officer of Yayasan CARE Peduli (YCP), which she joined three years ago as her first role in a non-governmental organization after over 25 years working in the development field, beginning with the United National Development Programme Indonesia.  Bona brings in a wealth of experience in the area of poverty, social justice, community empowerment, policy analysis, strategic planning and communications. Prior to joining YCP, Bona was CEO of the Millennium Challenge Account Indonesia, a national entity set up by the Government of Indonesia to manage the $600 million US-Indonesia Compact partnership. Before that, she was the Executive Director of Danamon Peduli Foundation, a social investment arm of one of the largest private banks in Indonesia.  She has also worked as a strategic planning and communications consultant for donors and the private sector.  Bona holds a degree in Anthropology from University of Indonesia, and a Masters in Social Policy from University of Sydney.

Ferry Akbar Pasaribu serves as the Assistant Deputy for Investment Strategy and Acceleration Policy at the Coordinating Ministry for Maritime and Investment Affairs of Indonesia as of August 2020. Previously he served as a diplomat (now with the rank of Minister Counselor) for over 23 years and was assigned in Colombia, Belgium, and the United States, promoting economic diplomacy. His current main portfolio is to continuously enhance the investment regulatory frameworks, aimed at creating a more business-friendly environment. He works with line ministries, embassies, as well as foreign and domestic investors. Ferry is also assigned to offer investment opportunities to foreign and domestic investors in infrastructure, especially toll road. He has a Master’s degree in International Relations (University of Indonesia) and received professional training at the Lee Kuan Yew School of Government, Australia National University, University of Sydney, and University of Maryland.

Lorraine Elliott is Professor Emerita in the Coral Bell School of Asia Pacific Affairs at the Australian National University where she previously held appointment as Professor of International Relations. She has also held visiting appointments at the University of Oxford, LSE, the Free University of Amsterdam, the universities of Sheffield and Nottingham, and Nanyang Technological University in Singapore. Professor Elliott is a former Chair of the Board of Directors of the Academic Council on the United Nations System and, until recently, a member of the Scientific Steering Committee of the Earth System Governance research network. She has also been an expert reviewer for the IPCC Working Group III report and for UNEP’s Global Environmental Outlook. Her research explores various aspects of global and regional (Asia Pacific) environmental politics, governance and ethics; transnational environmental crime; transitions to a green economy; and non-traditional security including human security, environmental and climate security, and has been funded by the Australian Research Council, the Japan Foundation, the US Institute of Peace, and the Riksbankens Jubileumsfond among others.

Paroche Hutacharoen is Senior Expert on Bond Market Development at the Public Debt Management Office, Ministry of Finance, Thailand. He has been overseeing PDMO’s debt management strategies and bond issuance plans to support the government’s fiscal stimulus measures infrastructure investment. His role includes initiatives to support the development of a local currency bond market, primary dealers’ system monitoring and development of new debt instruments. Recently, he played a key role in the successful issuance of Thailand’s first Sustainability bond and utilizing blockchain technology for retail debt to promote financial inclusion. Prior to re-joining the Ministry of Finance, he worked at the Secretariat of the Prime Minister for 3 years mainly in areas related to the economic and international relations related policies. Mr. Hutacharoen is currently on the Board of BCP Trading PTE. LTD (BCPT). He was employed as an Independent Director and Audit Committee of KrungThai Card Company Limited and Independent Director on the Board of Directors at Nok Airlines Public Company Limited. He holds a Bachelor degree (B.Sc) in Economics from the University College, London and a Master’s degree (M.Comm) specialization in Economics from the University of Melbourne.