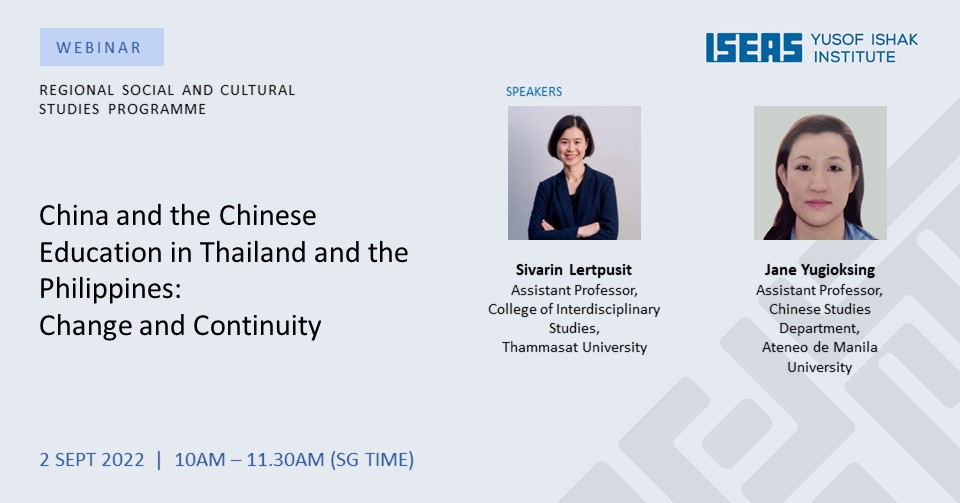 China and the Chinese Education in Thailand and the Philippines: Change and Continuity

In Thailand, education has been employed for decades as a tool to deliver Chinese soft power. Two time periods—the late Qing dynasty to the end of WWII and the post-Mao era—are the subject of this study. In the earlier period, Chinese schools were used by the Kuo Min Tang (KMT) and the Chinese Communist Party (CCP) as a medium to propagate their respective political ideologies and versions of “Chinese nationalism” among overseas Chinese in Thailand. However, due to strong resistance from the Thai government, these schools were eventually closed down. Only in the post-Mao era—after the normalization of Sino-Thai relations in the 1970s—has education once again become re-employed as a tool to disseminate mainland Chinese values, supported by the establishment of the Confucius Institutes. Chinese soft power has become even more entrenched in Thai education since The Office of Basic Education Commission in Thailand designated Chinese as a second language option in the Thai school curriculum.

Dr. Sivarin Lertpusit is an Assistant Professor at the College of Interdisciplinary Studies, Thammasat University and a researcher in the socio-political field. Her current position is a research fellow at ISEAS, Singapore. She finished her doctoral degree in International Studies (Southeast Asia studies) at the Graduate School of Asia Pacific Studies, Waseda University. Her studies focus on GMS and the influence of China. Her previous experiences and works are-for example- The Chinese Transborder and its Socioeconomic Impact to Boten People (Laos), Chinese student in Thai education and new Chinese Migrants in Chiang Mai and Chiang Rai.

Ms. Jane Yugioksing is an Assistant Professor at the Chinese Studies Department, Ateneo de Manila University. Her passion for bridging cultural differences between the Filipinos and the Chinese has brought her career spanning from a medical field to a Master’s degree in Education. She is a recipient of the Chinese Government Scholarship and is a current Ph.D. candidate in International Relations at Jinan University. She is a member of the International Society for the Study of Chinese Overseas and the Philippine Association for Chinese Studies. Her most recent published work is A Perception Based Study on Chinese Filipino’s Response to China’s COVID-19 Prevention Measures. She is currently researching the mobility of Chinese Filipino students and the social identity of new Chinese migrants in the Philippines.