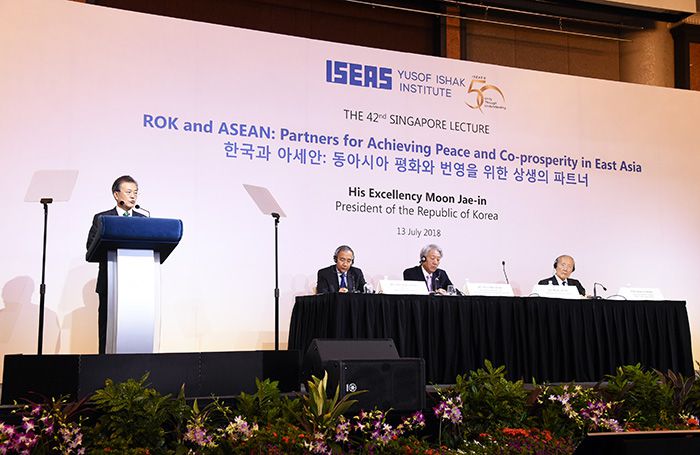 President Moon explained how his government’s New Southern Policy was centred on significantly enhancing ROK-ASEAN relations across all fields, and how this would help support peace and prosperity on the Korean peninsula. President Moon singled out the importance of ASEAN for helping set the conditions for the current phase of inter-Korea relations and the promise it holds to ending the legacies of the Cold War in Asia. North Korea’s membership in the ASEAN Regional Forum over the last two decades was vital for North Korea’s communication with the international community.

Reflecting on his own history as a war refugee, President Moon impressed upon the audience how desperate South Korea is for peace and how this goal is now much closer for South Korea, East Asia and the world. At the end of the lecture, Professor Wang Gungwu, Chairman Board of Trustees of the ISEAS-Yusof Ishak Institute, and Mr Choi Shing Kwok, Director, ISEAS – Yusof Ishak Institute; presented President Moon Jae-in with a pottery piece crafted by one of Singapore’s foremost potters, Mr Chua Soo Kim, entitled “Earth, Ocean, Sunset”. The Earth, Ocean, Sunset is part of his Blue Planet series and is inspired by the colours of nature. More than 600 people, including diplomats, government officials, business leaders, academics, students and members of the media, attended the lecture.