A+ A-
ROF 2018 is the 21st edition of the event. This year, 750 attended the event at Shangri-La Hotel. Participants came from diverse backgrounds, including the business and financial sectors, academic, government and diplomatic community, as well as domestic and international media.

ROF 2018 is the 21st edition of the event. This year, 750 attended the event at Shangri-La Hotel. Participants came from diverse backgrounds, including the business and financial sectors, academic, government and diplomatic community, as well as domestic and international media. Welcoming Remarks by Mr Tan Chin Tiong. (Source: ISEAS – Yusof Ishak Institute)
There were six sessions with 13 speakers and 6 moderators in total, covering a wide variety of topics ranging from US-China relations, economic trends to security issues affecting the region, as well as the general outlook for several key countries in the region. 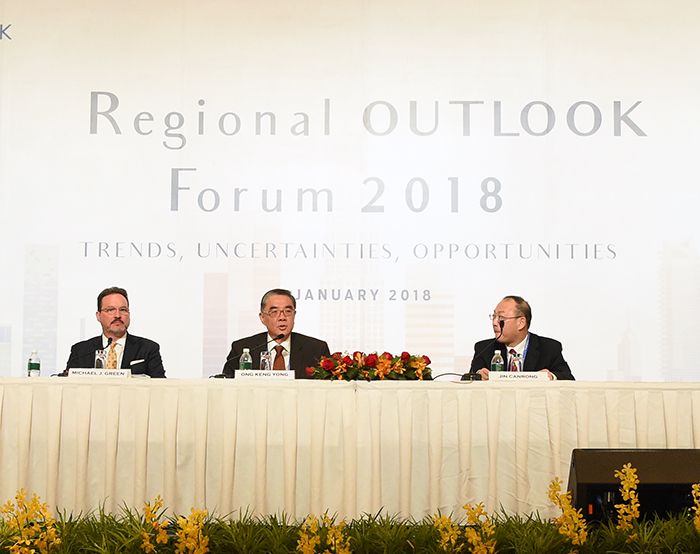 Dr Michael J. Green presented his views on US-China relations from the US perspective. He pointed out that China’s “New Model of Great Power Relations” had both positive and negative impact on US-China relations. On the one hand, it could avoid confrontation with the US, however, as the model excluded important US allies like Japan and South Korea, as well as India, Washington regarded it as a formula that would weaken US influence and interests in the Asia-Pacific region. While he acknowledged that the US withdrawal from the TPP (Trans Pacific Partnership) had harmed its credibility in the region, he also believed there were some factors that could reinforce cooperation in US-China relations, such as the historic economic interdependence between the two countries, and their active participation in international and regional organisations, including APEC, EAS (East Asia Summit) and ARF (ASEAN Regional Forum).

Professor Jin Canrong shared his analysis on US-China relations from the Chinese perspective. He noted that although US President Donald Trump had criticised China more than 200 times since taking office, China had spent substantial efforts in trying to cultivate good relations with the new administration, such as giving Trump more than US$250 billion worth of “gifts” (business agreements) during his state visit to China last November. Despite the difficulty in dealing with a “Divided States of America”, the Chinese leadership under President Xi Jinping had defined China as a global power instead of just a regional power, accompanied by a more proactive foreign policy, which was not all “carrots” as was in the past, but would also use “sticks” when necessary. Session 2 — Economic Trends and their Impact on the Region 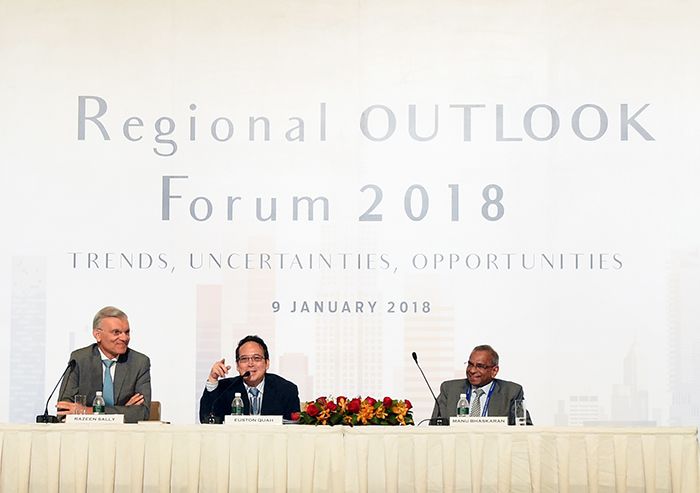 Session 2 was moderated by Professor Euston Quah, Head of the Division of Economics at Nanyang Technological University, and President of the Economic Society of Singapore. From left to right: Associate Professor Razeen Sally, Professor Euston Quah, and Mr Manu Bhaskaran. (Source: ISEAS – Yusof Ishak Institute)
Associate Professor Razeen Sally spoke about the “Global Economic Trends and Impact on the Asia-Pacific,” and noted the positive global growth in the US, Europe and many of the developed economies and emerging economies in Asia. He questioned whether this growth could be sustained, and highlighted the warning signs such as the risks of low productivity growth, Chinese debt problem, and “creeping protectionism”. He also discussed the possibility of the US returning to the TPP in the future. He predicted that the TPP, even without the participation of the US at this point, would still likely to have a significant impact when in force.
Mr Manu Bhaskaran shared his insights on “ASEAN Economic Trends in 2018”. He had a positive outlook about the global economy’s impact on Asia, especially Southeast Asia. He noted that there were strong signs of recovery in capital spending, and positive domestic engines of growth that contributed to Southeast Asia’s growth and recovery. Domestic consumption was strong, and infrastructure spending fuelling that growth. However, he also warned of some important risks, including geopolitical uncertainties in the Korean peninsula and the Middle East, as well as financial risks in imbalances, particularly in China. Session 3 was moderated by Associate Professor Kumar Ramakrishna, Head of Policy Studies and Coordinator of National Security Studies Programme, S. Rajaratnam School of International Studies, Nanyang Technological University. From left to right: Ms Amina Rasul-Bernardo, Associate Professor Kumar Ramakrishna, and Ms Sidney Jones. (Source: ISEAS – Yusof Ishak Institute)
Ms Amina Rasul-Bernardo presented her analysis on “Impact of Marawi on Society in Southern Philippines”. She emphasized the need for socio-economic growth and a comprehensive programme to combat extremist thought. Recent survey findings had shown that the locals in Marawi trusted the religious leaders more than the police. However, barely any progress had been made towards allowing these religious leaders to contribute towards peace building and development. She added that religious leaders have the substance to convey the right messages and should instead be conceived as “allies” to create capacity building to neutralize the ISIS message. Likewise, women and youth could play a significant role in containing violent extremism.
In her presentation on the “Implications of Marawi for Southeast Asia”, Ms Sidney Jones stated that it was highly unlikely that there would be a vast shift in global Jihadism that would turn the Marawi region into a second front. However, it was evident that the Philippine government made futile efforts to comprehend the process of Islamic radicalization. On the possibility of foreign fighters returning from Iraq and Syria to assume leadership roles, she opined that there would not be a flood of returning fighters, but was certain that Marawi would remain a training ground that Indonesian radicals could draw inspiration from. 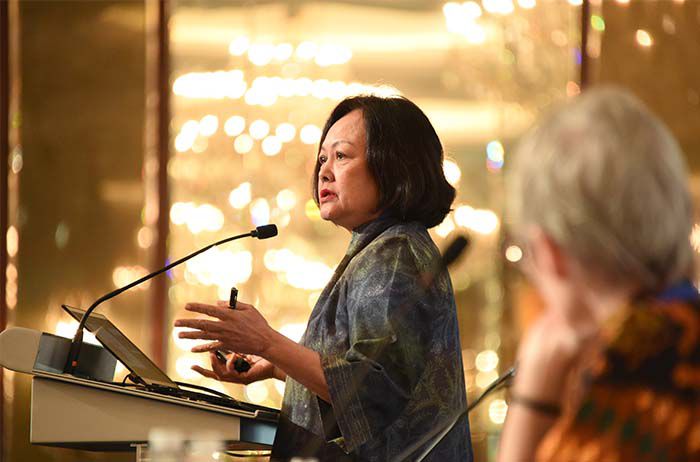 Ms Amina Rasul-Bernardo, President of the Philippine Center for Islam and Democracy on the “Impact of Marawi on Society in Southern Philippines”. (Source: ISEAS – Yusof Ishak Institute) Ms Sidney Jones, Director of the Institute for Policy Analysis of Conflict, on the “Implications of Marawi for Southeast Asia”. (Source: ISEAS – Yusof Ishak Institute)

Session 4 — Outlook for Indonesia and The Philippines 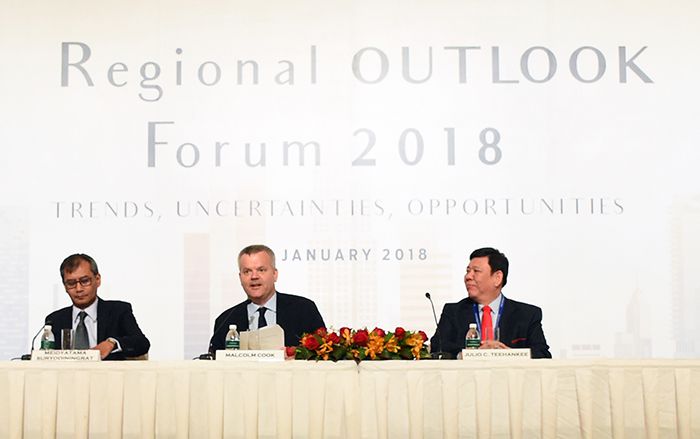 Session 4 was moderated by Dr Malcolm Cook, Senior Fellow at ISEAS-Yusof Ishak Institute. From left to right: Mr Meidyatama Suryodiningrat, Dr Malcolm Cook, and Professor Julio C Teehankee. (Source: ISEAS – Yusof Ishak Institute)
Mr Meidyatama Suryodiningrat gave a comprehensive overview of the “Political Dynamics in Indonesia: Lead-up to the 2019 Elections”. He said that 2017 was a good year for Indonesia, marked by stable economic growth and a rising investment confidence. However, 2018 would be a year of “political noise”, as Indonesia geared up for simultaneous local elections in 171 administrative regions and the presidential election in 2019. He predicted that the presidential election would be a two-horse race between Jokowi and Prabowo, with no political party being able to achieve an absolute majority in parliament.  The PDIP party would likely still capture the largest percentage of votes in the parliament, receiving about 22-23% of the votes.
Professor Julio C. Teehankee presented on “Philippine Politics and Security in the Age of Duterte.” He argued that Duterte’s rise might be seen as a major rupture in Southeast Asia’s oldest democracy. Rather than the presidency changing Duterte, he argued that it was Duterte who had changed the Philippine presidency. He attributed Duterte’s victory to protest by the new middle class, who suffered from a lack of public services despite promises of greater government service delivery. He also outlined three strategic imperatives that Duterte’s administration would need to address in the coming years: firstly, to secure peace and order; secondly, to sustain economic growth of 6.3%, which the Philippines had experienced since 2010; thirdly, to fulfill his campaign promise to change the constitution to allow a structural shift from a unitary to a federal form of government. 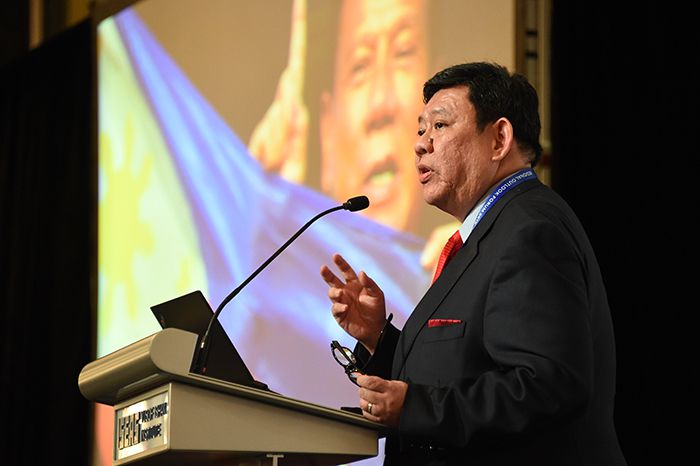 Session 5 — Outlook for Myanmar and Thailand Session 5 was moderated by Professor Joseph Chinyong Liow, Dean of S. Rajaratnam School of International Studies, Nanyang Technological University. From left to right: Dr Thant Myint-U, Professor Joseph Chinyong Liow, Dr Wong Yit Fan, and Dr Thitinan Pongsudhirak. (Source: ISEAS – Yusof Ishak Institute)
In his presentation on “Myanmar: The Peace Process and Civil-Military Relations”, Dr Thant Myint-U pointed out that the old way of thinking and assumptions about Myanmar could no longer apply. While this presented an opportunity for coming up with new and unconventional ways of doing things, there were some realities from the narrative to bear in mind. The crisis in Rakhine had brought to fore the “unfinished” nature of the country in terms of how the politics of race and ethnicity were central to the quest for identity. He highlighted that in 2018, three big “wheels” in motion bear watching: first is the NLD’s insertion of the old opposition into a new and evolving state, which is still an unfolding story; second is an inchoate nationalism that may veer towards either inclusion or exclusion; third is China being the elephant coming into the room, at a time when Western sentiment is cooling and pressure for economic performance is mounting.
Focusing on the “Economic Performance and Challenges in Myanmar”, Dr Wong Yit Fan commented although there has not been much real debate (or agenda) on the future of the economy, the situation in Myanmar defied any real forecasting. He pointed out that there are cross-currents at play within the economy and country as a whole, never before seen in other emerging economies. He also noted that the real challenge now is to implement the reforms instituted earlier. Areas of risk lie in the banking sector, while the most positive potential lie in the start-ups and SME sector where there is now a more level playing field.
Dr Thitinan Pongsudhirak shared his views on “Thailand’s New Politics: Military, Monarchy, Democracy”. He posited that elections will take place in Thailand this year because of mounting pressure on the senior leaders. However, he predicted that the repeated pattern of elections, protests, and coups may not happen again this time, and that bridging the gap between elections and democracy will be messy and nasty. 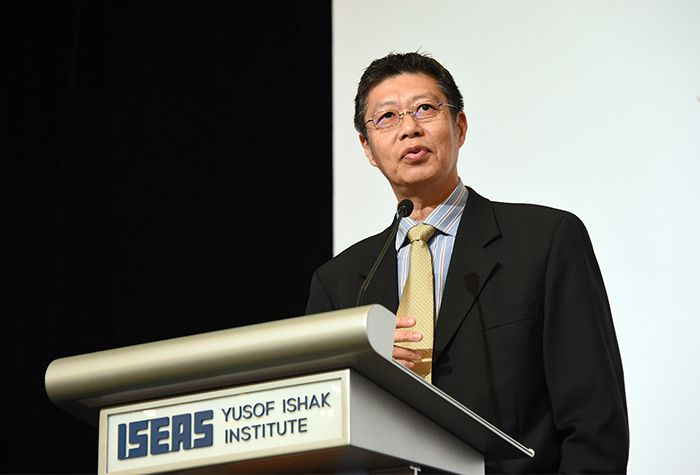 Session 6 was moderated by Dr Francis E Hutchinson, Senior Fellow at ISEAS-Yusof Ishak Institute. From left to right: Datuk Seri Azman Ujang, Dr Francis E Hutchinson, and Dato’ Seri Kalimullah Hassan. (Source: ISEAS – Yusof Ishak Institute)
The main focus of this session was on the upcoming general elections (“GE-14”) in Malaysia. The two speakers, Dato’ Seri Kalimullah Hassan and Datuk Seri Azman Ujang, had the same opinion that moving forward, GE-14 will be shaping the prevailing dynamics of Malaysia this year. GE-14 is forecasted to happen before August 2018, and likely during the March school holidays (24 March 2018).