Special issue of the Journal of Southeast Asian Studies addressing a key task ahead for ASEAN economies. Co-editors are ASC’s own Sanchita Basu Das and Prof Tham Siew Yean of Universiti Kebangsaan Malaysia.

Moving the AEC Beyond 2015: Managing Domestic Consensus for Community-Building

The ten Southeast Asian economies reached a milestone on 31 December 2015, when they announced the formation of an ASEAN Community. Although this includes three pillars – ASEAN Political-Security Community, ASEAN Economic Community (AEC) and the ASEAN Socio-Cultural Community – it is the economic pillar that generates immense debate, due to its expected quantifiable benefits to member countries. This book focuses on the ASEAN Economic Community and seeks to explain the need for building domestic consensus within the member countries. It includes six country chapters – Indonesia, Malaysia, the Philippines, Singapore, Thailand and Vietnam – that examine sources of domestic conflict/s in greater detail and depth. Ex-Secretary General of ASEAN, Mr Rodolfo Severino, co-authored a regional chapter that highlights the political nature of ASEAN economic cooperation since its inception in 1976. For ASEAN beyond 2015, the book articulates the need to obtain a strong domestic consensus that supports the integration initiatives of the AEC. This can be viewed as a way forward to accelerate and deepen integration within ASEAN..

Trade Regionalism in the Asia-Pacific: Developments and Future Challenges

Asia has witnessed a proliferation of free trade agreements (FTAs) since the turn of the millennium. The first regional agreement — the ASEAN FTA — was transformed into the ASEAN Economic Community at the end of 2015. In the meantime, ASEAN forged five ASEAN+1 FTAs and began to negotiate a sixteen-member Regional Comprehensive Economic Partnership (RCEP) Agreement. In parallel, the U.S.-led Trans-Pacific Partnership (TPP), supporting U.S. foreign policy of “Pivot to Asia”, was broadly agreed in October 2015. This book ruminates on these regional agreements, their economic and strategic rationales and challenges during negotiations and afterwards. The book brings together eminent scholars and experts to deepen our understanding of the complex nature of the mega-regional trade agreements and their implications. It is useful both for the academic and research community and for policymakers who focus on trade and economic cooperation issues.

Do Young People Know ASEAN? Update of a Ten-nation Survey

In 2007, a survey — the first of its kind — was carried out to gauge young people’s awareness of and attitudes towards ASEAN. An update to the 2007 survey was carried out in 2014–15 among the same target population but with an expanded scope of twenty-two universities and institutes of higher learning across the ten member states. In the updated survey, we found that there are more ASEAN-positive attitudes region-wide, but there are also increases in ASEAN-ambivalent attitudes at country-level in some ASEAN members. This book details the key findings of the updated survey compared to the earlier survey. These include nation-by-nation results and a summary of region-wide trends, as well as what they suggest for the prospects of ASEAN integration beyond 2015.

Join our mailing list to be updated on ASC events and publications, including ASEANFocus and The State of Southeast Asia Survey.

The ASEAN Economic Community and Beyond: Myths and Realities

Author: Sanchita Basu Das
The year 2015 has special significance for regional economic integration. The ASEAN Community, integrating the political, economic and social aspects of regional cooperation, will complete its first milestone by December 2015. Expectations of tangible benefits under an ASEAN Economic Community have attracted much attention though many of the initiatives will be realized post-2015.The Southeast Asian economies are also involved in two other regional initiatives. First is the Trans-Pacific Partnership (TPP), initiated by the United States. Second, the discussions on regional connectivity have broadened; China has emerged as a recent lead proponent with its proposals for “One Belt, One Road” and the Asian Infrastructure Investment Bank. All these together have implications not only for individual Southeast Asian countries but also for regional trading architecture. To aid in understanding the beginnings, development, and potential of these grand plans, this collection of 22 essays offers a rich analysis of ASEAN’s own economic integration and other related initiatives proliferating in the broader Asia-Pacific region.

Awareness and Attitudes Towards ASEAN: Updated Findings from a Ten-Nation Survey of University Students in ASEAN 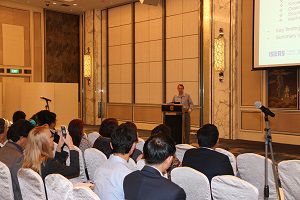 The ASEAN Studies Centre at ISEAS-Yusof Ishak Institute organised a seminar on 24 August 2015 to share the findings from an update of a survey on undergraduates’ awareness of and attitudes towards ASEAN. The survey update, which builds on findings of an earlier survey in 2007, was carried out in 2014-15 among 4623 students from 22 universities across the region. The 2014 survey findings highlight that region-wide, ASEAN-positive attitudes have remained consistent among young educated citizens in the region. Students displayed more knowledge about ASEAN, and consider themselves “citizens of ASEAN”.  They also ranked people-related priorities higher as important aspects of regional cooperation.
The seminar was held in conjunction with the 48th ASEAN Day reception hosted by the Ministry of Foreign Affairs of Singapore.  In his speech, Minister for Foreign Affairs K Shanmugam referred to the survey results and noted that regional economic integration must be complemented by efforts for a stronger regional identity.  Citing the survey results, Mr Shanmugam observed that “We are on the right track when our youths see themselves as part of the ASEAN community and feel a shared sense of responsibility for ASEAN’s future”.
A fact-sheet of the key findings from the 2014 Survey is available here.

The Political Economy of the Regional Comprehensive Economic Partnership (RCEP) and the TransPacific Partnership (TPP) Agreements: An ASEAN Perspective

ASEAN has been active in the formation of regional trade agreements (RTAs) since the early 1990s. Besides its own integration initiatives like the ASEAN Free Trade Area and the ASEAN Economic Community, ASEAN has also enacted five plus 1 FTAs with China, South Korea, Japan, India, Australia and New Zealand, making ASEAN an FTA hub for broader Asian region. A decision was reached in November 2011 to establish a comprehensive RTA, covering the five ASEAN+1 FTAs under the Regional Comprehensive Economic Partnership (RCEP) framework. Another RTA that has attracted lot of attention lately is the TransPacific Partnership (TPP), led by the United States.

Despite the similar objective of increasing economic cooperation, the two RTAs differ from each other. RCEP is expected to accommodate the development differences of the member countries, while TPP is said to have a more demanding set of commitments. Both RCEP and TPP are perceived to have strategic roles in the AsiaPacific region. TPP is a component of the U.S.’s Asian ‘pivot’ strategy , in reaction to Asia’s economic rise and integration efforts. TPP also can be viewed as a consequence of the limited integration progress under APEC. In addition many have argued that TPP is a containment strategy aimed at China. RCEP is expected to reinforce ASEAN ‘centrality’ in the wider AsiaPacific regional architecture. The ongoing negotiations for both RCEP and TPP face complex challenges, and are expected to encounter difficulties to conclude.